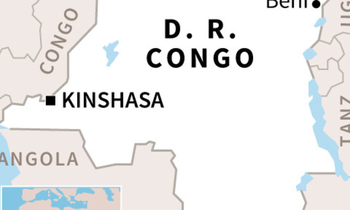 Heavy gunfire was heard on Monday outside two UN camps near the eastern DR Congo town of Beni, where people had gone to protest after an armed group killed eight civilians, an AFP reporter said.

The shooting came from Congolese security forces who sought to disperse the demonstration, the reporter said.

After setting fire to Beni town hall, partially damaging it, hundreds of people headed to the UN camps on the outskirts, outraged at failures to curb the ADF, a shadowy militia blamed for hundreds of killings since 2015.

"Demonstrators smashed the external wall of one of our offices. Homes of United Nations personal were attacked and vandalised," a spokeswoman for the UN force said.

Army spokesman Colonel Mak Hazukai confirmed that the town had been attacked overnight, telling AFP that "the enemy entered the Boikene quarter and killed eight civilians".

Seventy-seven civilians have been killed in the Beni region since November 5, according to a not-for-profit organisation, the Congo Research Group (CRG).

The army launched an offensive against the Allied Democratic Forces (ADF) militia on October 30, vowing to "definitively wipe out" armed groups in the lawless east.

Two policemen were bleeding from wounds in the town centre, an AFP reporter saw.

The group has plagued the North Kivu region bordering Uganda since the Congo Wars in the 1990s, although its membership has since broadened to non-Ugandans and it has not carried out an attack on Uganda for years.

The so-called Islamic State group has claimed some of the attacks ascribed to the ADF this year, but there is no clear evidence of any affiliation between the two groups.

MONUSCO is one of the biggest UN peacekeeping operations in the world.

On Saturday, the mission said the Congolese army had launched the anti-militia offensive unilaterally.

"MONUSCO cannot engage in operations in a war zone without being asked and without strict coordination with the national army," it explained in a tweet.

Uncoordinated action could lead to casualties from friendly fire, it added.

Beni, in addition to being in the front line of militia violence, is also the epicentre of an Ebola epidemic that has killed around 2,200 people since August 2018.

On Friday, the World Health Organization (WHO) said fighting in the region meant an opportunity to end the outbreak could be lost.

Also in eastern DR Congo, at least 29 people were killed on Sunday when a small plane crashed after takeoff, smashing into a densely-populated area of the city of Goma.