How Naguru nurtured Rugby in Uganda 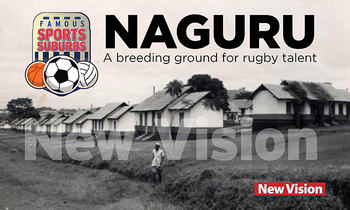 The Naguru housing estate was a talent production area that fed almost all of Uganda's national teams. So, when it was torn down in 2011, it was like a chapter in Uganda's history was being erased. Naguru's tendency to produce sporting talent can be related to its proximity to the country's biggest sports complex - Lugogo. 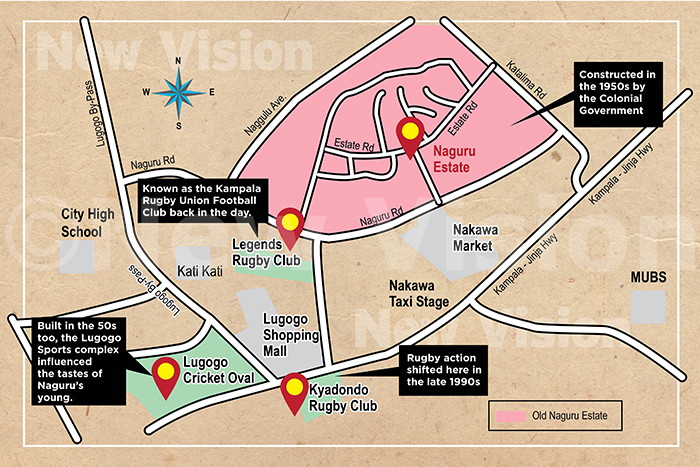 The colonial government established the Naguru Estate to provide affordable accommodation for low-income earners. The estate was properly planned, with the homes set out in groups (named according to the alphabet) and each house identified by a number. Within it were a community centre, clinic, church, recreational grounds, green spaces, lock-up shops, student hostels, and schools. All the roads were tarmacked with proper drainage and street lighting.

The estate, also known as African Quarters, was one of the routes for Uganda Transport Company (UTC), a government-owned public transport provider. This estate was home to people from all corners of Uganda, making it a melting pot of cultures. 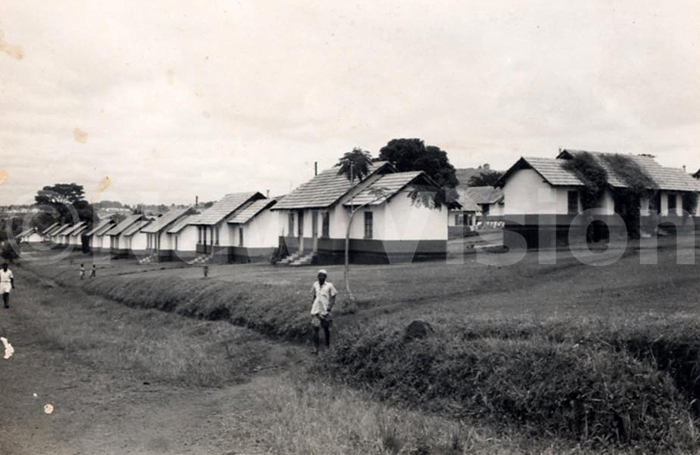 Naguru Estate back then

Also in the 50s, the colonialists introduced rugby to the country and in 1958, Uganda played her first official match against Kenya, losing it 11-21 to the neighbours.

By the 1960s, sports was fully established in Uganda. As Uganda prepared for Independence, indigenous Ugandans were beginning to participate fully in a variety of sports. Football, boxing and athletics were the three main African sports played by the youngsters of Naguru— but then there were many other sports too and these included rugby.

While rugby had not yet taken full hold, an October 9, 1962 Uganda Argus article indicates there was great hope for the sport. "With the weight of numbers behind them, the time will come, of course, when Africans will dominate virtually all sports. Perhaps the most outstanding example is rugby, where the all-African Kyambogo team has proved that after a season playing together, it is capable of giving all the strong European clubs a really tough match," the article stated. 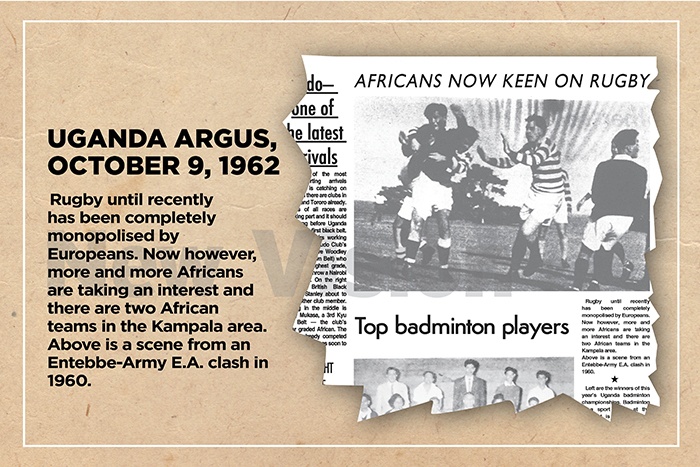 Blackheath Rugby Club, a rugby club from the London, UK was affiliated to Kampala Rugby Club.  However, due to the number of local and foreign expatriates in the team, a second side was formed in 1960 and was named Heathens.

Heathens normally played their games on Wednesday evenings against teams like Namilyango, Makerere College School, etc the bulk of whose players came through the Naguru estates.

However, during President Idi Amin's time in the 70s, Heathens ceased to exist because most of the players were expatriates. 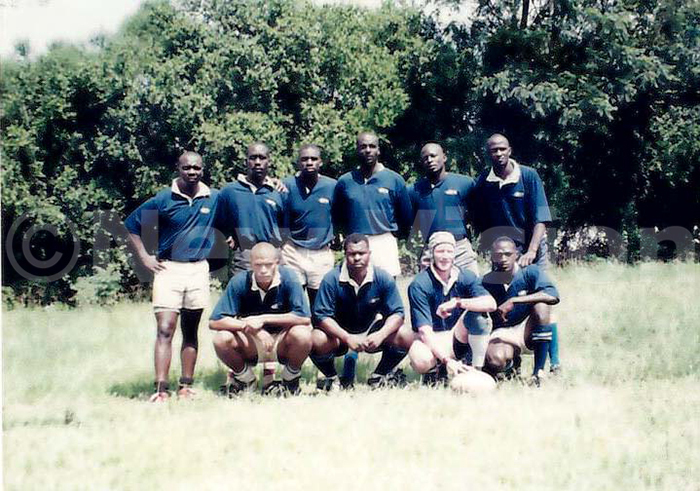 Early years of the Heathens

In 1985, Paul Volrath, Paul Cockerill and Jerry Burley resurrected the Heathens rugby team. In 1987 Ian Walker and Paul Volrath continued to grow the Heathens brand at what is now called Legends rugby grounds.

Since 1990, Heathens has had numerous sponsors (DHL in the 90s, MTN from 1999-2014 and HIMA Cement since 2016). They have also managed to win several local accolades with a great deal of talent coming through the Naguru estates. 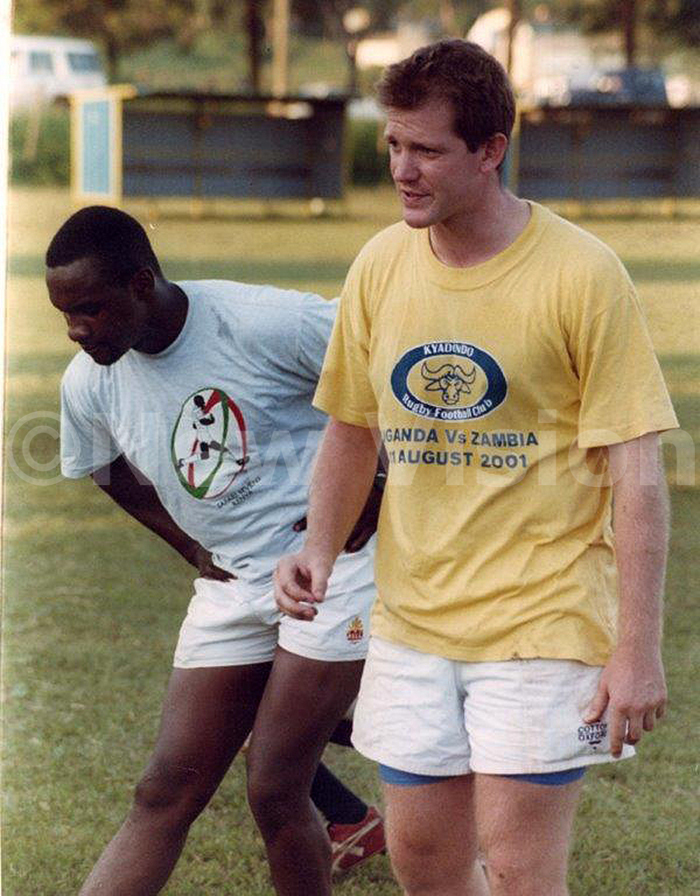 Reuben Ambicha was one of the expatriates that came to Uganda and played rugby for Heathens. He arrived in Kampala Uganda on December 30, 1997.  He recalls: "When I landed in Kampala, I knew of a few players from their participation in the Safari Sevens like Yayiro Kasasa and the late Edward Kitaka." Kasasa was one of Naguru's big gifts to rugby. 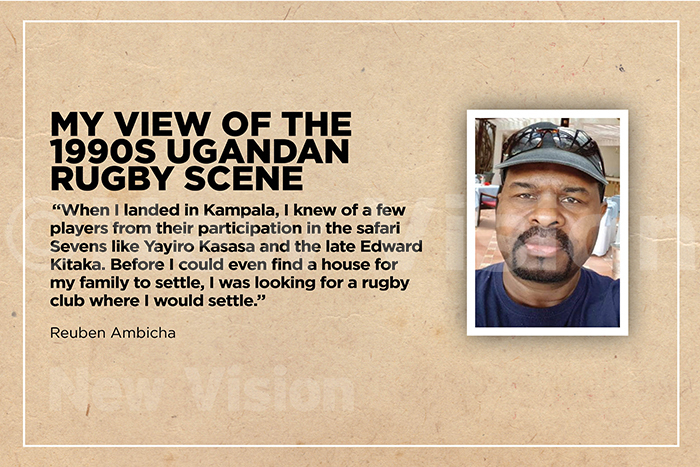 In a column shared with New Vision, Ambicha writes: "In 1998, we started feeling that Kampala Club (now Legends) was too crowded. All teams (Kobs, Heathens, Pirates and Rhinos) were training and playing in the same space. We would only have a half a pitch to train as another team was training on the other half. We started hunting for another ground so as to expand rugby. Across the main highway, there was a Shell club which had a football pitch that had been made small with the plantation of bananas around it. The big boys, Ian Walker, Gerry Burley, Jim Middleton and others approached the officials and also the Kampala authorities through the good connections that they had about conversion of this space into a rugby pitch and club. We got a temporary lease and off we started fixing this. We worked hard to clear the space, flatten it and clear off all stones and broken glass. It was through hard work that the club is the way it is today. Please note that were not allowed to build any permanent structure and that is why we still have the clubhouse the way it is. Still "temporary".

In 2011, Kampala Rugby Club, now known as Legends was sold to a private investor and this sparked off wrangles between the rugby fraternity, URU and the executive of Kampala Rugby club. The wrangles led to the suspension of the KRUFC executive members Steven Ojambo, John Musoke, Henry Musoke and Sam Ahamya.  That year also saw the demolition of the Naguru Estate that had hosted so much of the talent that had built Rugby in Uganda over the years. 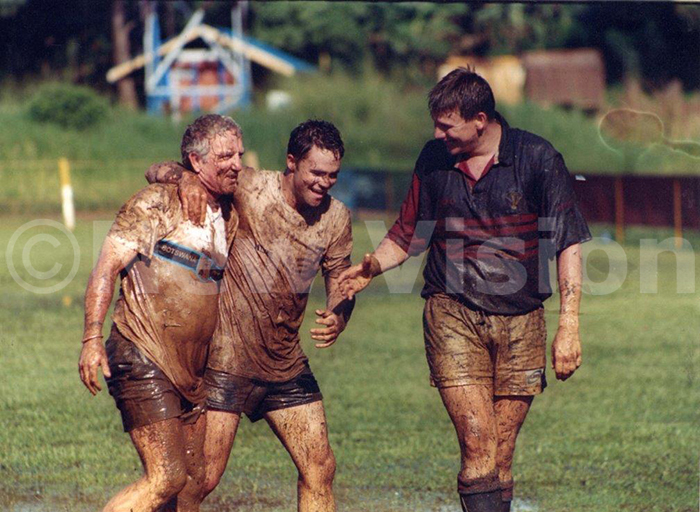 2002 Botswana rugby team coach Martin Colley, left, walks off with some of his players after testing the muddy Kyadondo Rugby ground ahead of their clash against the Uganda rugby side