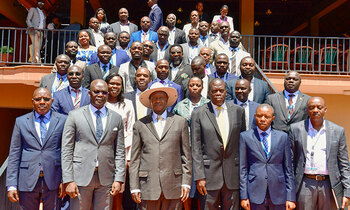 "The President (Yoweri Museveni) is funny. He has joked with us," Esege, a Democratic Republic of Congo (DRC) timber trader who exports timber to Uganda said.

This was during the first joint Uganda and DRC business forum held at Speke Resort Munyonyo. Esege, however, wondered why Uganda's immigration officials and security officers do not smile and joke with them: "They should copy the President, they should be like their President, who smiles and jokes with us".

Esege was commenting on the informal nature of timber trade in DR Congo, which he said needs to be formalised.

Museveni while opening the forum referred to Congolese and Ugandans who do not know Swahili and speak only English as Englishmen. "Mzee speak in Swahili," shouted some of the Congolese.

Museveni said Africans were sleeping too much and not taking advantage of the business opportunities. "Africans dormir beaucoup," Museveni said in French meaning Africans sleep too much.

He said many similar tribes live freely in the region with some people not knowing they are there. He cited the Alur who exist in Nebbi and DR Congo.

He said it was not clear whether the Late President Idi Amin was from Uganda or DR Congo because his tribes-mate were living in DR Congo and South Sudan.

Museveni excited the Congolese when he said there should be direct taxes on manufacturers and at the borders. When he mentioned that Ugandans spend part of their salaries on beers in the bars, the Congolese were tickled.

"You see China of 1.3b people and America (329m people) quarreling over markets. But we have 80m people in DRC and 42m in Uganda and we think that is a lot. Ignorance is a good thing because you will not know what will kill you. If you knew what will kill you, you would get worried, so when you die you will not know what killed you. I appeal to Africans to wake up," Museveni said.

"We have Swahili which can unite us. We urge the private sector in the DR Congo to fast track their entry into the East African Community and the African Continental Free Trade Area," Bitature said.