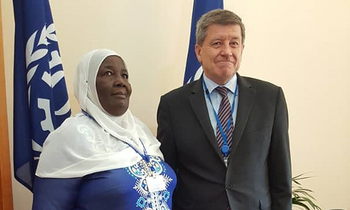 The Minister of Gender, Labour and Social Development, Janat Mukwaya has called for a review of the staffing composition within the International Labour Organisation (ILO) to reflect the organisation's diversity in nature.

"The universal nature of the ILO should be better reflected in staff composition through a renewed commitment to diversity, including geographical diversity and gender parity," Mukwaya said while delivering a speech on behalf of the Africa Group at the just concluded 337th Session of ILO's governing body that was held in Geneva, Switzerland.

The meeting was held from October 24 to November 7, according to a statement issued from the gender ministry.

The governing body also adopted Mukwaya's proposal that the International Labour Office should submit to the next governing body in March 2020 a report indicating the gender and geographical distribution of regular staff by category and grade.

Uganda was voted to the ILO's governing body for a three-year term during the 106th international conference held in Geneva in June 2017. The governing body is the executive organ of the ILO.

A wide range of issues were considered at the 337th session of the governing body. One of the key decisions taken was that the International Labour Office should not renew public-private partnerships (PPP) with the tobacco industry in line with the Model Policy for Agencies of the United Nations System on Preventing Tobacco Industry Interference.

In order to ensure that activities to end child labour previously funded by the tobacco industry do not stop, the governing body adopted the Integrated Strategy on Addressing Decent Work Deficits in the Tobacco Industry, the statement added.

Under the said strategy, the activities to address child labour will continue but will be financed by ILO resources.

Accordingly, Uganda as one of the former PPP countries will receive $5m from 2020-23 towards addressing child labour in the tobacco industry.