Why Indians want to be a tribe in Uganda

Amin expelled about 50,000 Indians from Uganda on grounds that they were milking the country's economic cow without feeding it. 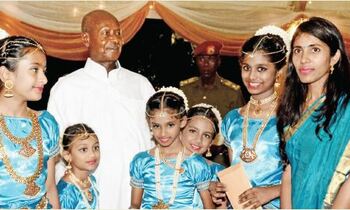 PRESIDENT Yoweri Museveni has promised to include, in the Constitution, Indians as one of Uganda's tribes.

There are over 1.3 billion Indians living in various parts of the world, but the majority of them in India.

His comments were greeted by ululations and clapping from the Indians. There are sixty recognised indigenous communities in the Uganda Constitution. Although the demand to include Indians was not part of the speech delivered by the leader of the Indian Association in Uganda, Mohan Rao, the Indians have previously asked Government to recognise them as a Ugandan tribe.

But the association's chairperson handed Museveni a document that he said carried some of the issues he alluded to in his speech and a detailed description of the challenges faced by the Indian business community in Uganda.

It is not clear if the demand for inclusion into the Constitution was in the document handed to the President. Growing up, the President said he knew Indians families that lived in Ntungamo district, which were actively engaged in business. "When we came to Government, we knew Indians were playing a role in Uganda.

It was a big mistake for Idi Amin to expel them," he added. Amin expelled about 50,000 Indians from Uganda on grounds that they were milking the country's economic cow without feeding it.

At the time, they are said to have owned 90% of the businesses in Uganda and paid 90% of the taxes.

BUSINESS
The Asians started to return to Uganda after 1986 when Museveni took over power after an armed struggle. Today, Indians are said to constitute about 1% of Uganda's estimated 40 million population, but pay 65% of the taxes, according to their association.

This implies that the Indians control a big part of Uganda's business sector. Indians are involved in a number of businesses in Uganda including hotels, banking, manufacturing and retail. Recognising Indians as a Ugandan tribe might deepen their social integration and protect their businesses.

Over the years, Indians have been asking Uganda to give them constitutional recognition as if has been done in Kenya.

HOME TO MANY
Sanjiv Patel, one of the Indian business leaders, told New Vision in 2017, that Uganda has been his home since his grandparents moved to this country many years ago. "This is not about land. In fact, if we are recognised, we shall be the only tribe that is spread all over Uganda," he added.

PLEDGES
Museveni also agreed to the demand from Rao to offer Indians land in Kampala where the community can hold sports and cultural activities. This, Rao, said would benefit both countries. "We shall find that land. But it might not be in Kampala. We can find you enough land slightly outside Kampala," he added.

Responding to a request by Rao for Uganda Airlines to launch a direct flight to India, the President said. "The airline has been restored. We started with smaller ones to do regional flights. But we shall be flying to Bombay, London, and Guangzhou directly without going through Dubai soon. The Airbus 330-800 will be here soon," he explained.