Putin thanked Ugandan for taking part in the summit, stressing that the two countries have a common task of developing trade and economic relations. 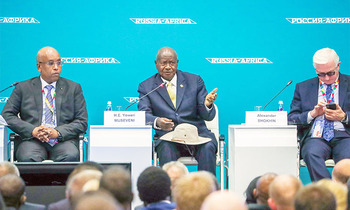 President Yoweri Museveni has said Uganda can enhance the development of various sectors with support from Russia.

He stressed that with the help and support from "our Russian partners" Uganda could achieve great success in all spheres such as military and military-technical cooperation, energy sector, agricultural and mining business.

Museveni made the remarks while meeting his Russian counterpart, Vladimir Putin at the Russia-African Summit, at the Russian Resort City and Economic Business and Sports Centre-Sochi.

Museveni was accompanied by the Foreign Affairs Minister, Sam Kuteesa, and the Principal Private Secretary to the President, Molly Kamukama and Ministry of Foreign Affairs Permanent Secretary, and Ambassador Patrick Mugambwe among others.

President Museveni stressed that the development of various sectors would lead Uganda into a highly industrialised nation, noting that the population of Uganda is now 42 million people, but projecting to reach 106 million by 2050.

He noted the potential in supporting each other's prosperity through trade among the four blocs: Africa, Russia, China and India, is very great and Uganda plus Africa at large will be a great spur in the cluster.

"I would like to emphasise the necessity of organising such summits as Russia - Africa because we fight for freedom and especially Russia and China helped us in this struggle," Museveni noted.

Putin thanked Ugandan for taking part in the summit, stressing that the two countries have a common task of developing trade and economic relations to increase the level of commercial exchange, a reason why a great step was taken during a business mission in October 2017.

It was geared towards the creation of a special group, working in the mineral resources sector within the frame of inter-governmental commissions.

"I would like to focus your attention on the fact that some combined projects are already being implemented, such as cotton production for example, we see possibilities for further cooperation in other spheres like construction, development of information technology and cybersecurity, agriculture, medicine, mass media, operations and maintenance of helicopters and in ecology," he noted.

The State Spokesperson of the Present Russian Federation, Dmitry Peskov said that the summit opened up the most effective opportunities for business promotion because of its unique business programmes.

The summit which was attended by various heads of states and other delegates discussed the role of Russia's agenda in Africa and its promotion, Africa's role in the international financial system, expanding cooperation, export and investment, as well as security challenges.