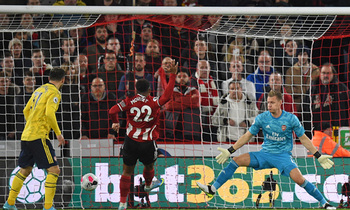 
When Arsenal failed to deal with a corner deep in their box in the 30th minute of Monday night's tie at Bramall Lane, Lys Mousset exhibited great poacher instincts to poke in what would go on to be the only and winning goal.

It was the Sheffield man's second goal of the season. The Gunners were left to ponder on what could have gone wrong.

The result means Arsenal are in fifth while Sheffield climb into the top half of the table, in ninth place.

Here is a selection of pictures from the action:

Pierre-Emerick Aubameyang was set to lead the Gunners attack

But at Bramall Lane, the hosts, Sheffield United, were not pushovers

Then came the goal after half-an-hour of play. Lys Mousset stuck out his leg to score the opening goal from a corner

A huge goal it was for the home side

Emery had to find a way to break Sheffield

Second half action saw Arsenal huff and puff for an equaliser

Time was fast-running out for Arsenal

In the end, Emery and co were left crestfallen