Theatre through the years

The political drama at those two centres reached its peak in 1977, when secret service army men dragged Byron Kawaddwa from rehearsals at National Theatre 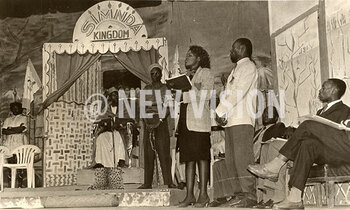 Uganda; a nation of drama Part 1

In theatre, you find God; partly because all theatre is a moral, and partly because there is a saintliness that hovers around the people who work there - the playwrights, directors and actors especially. 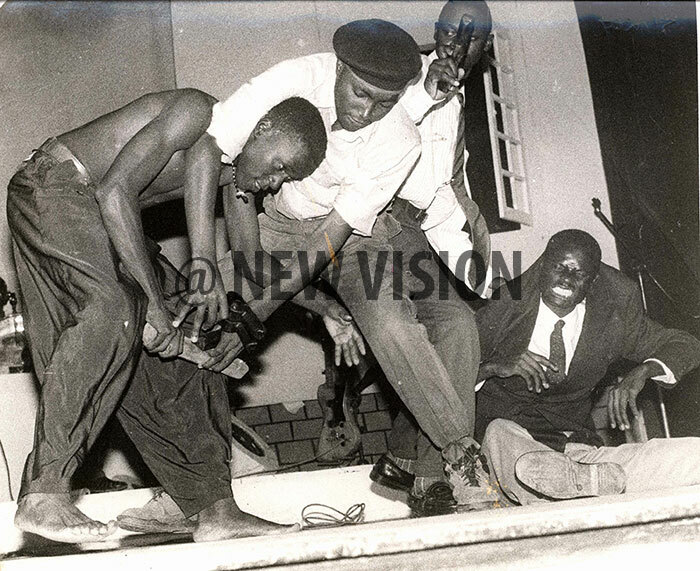 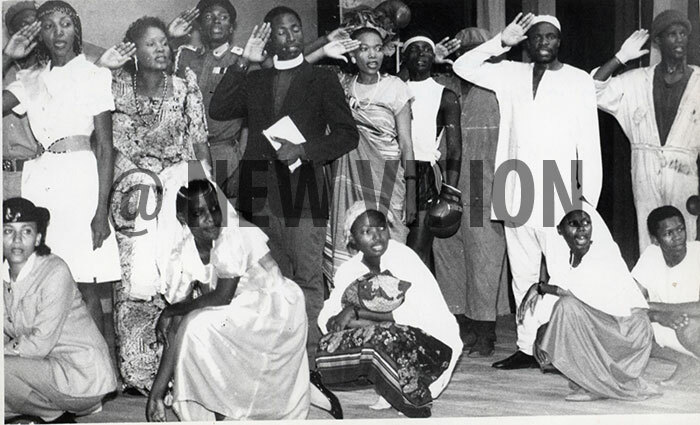 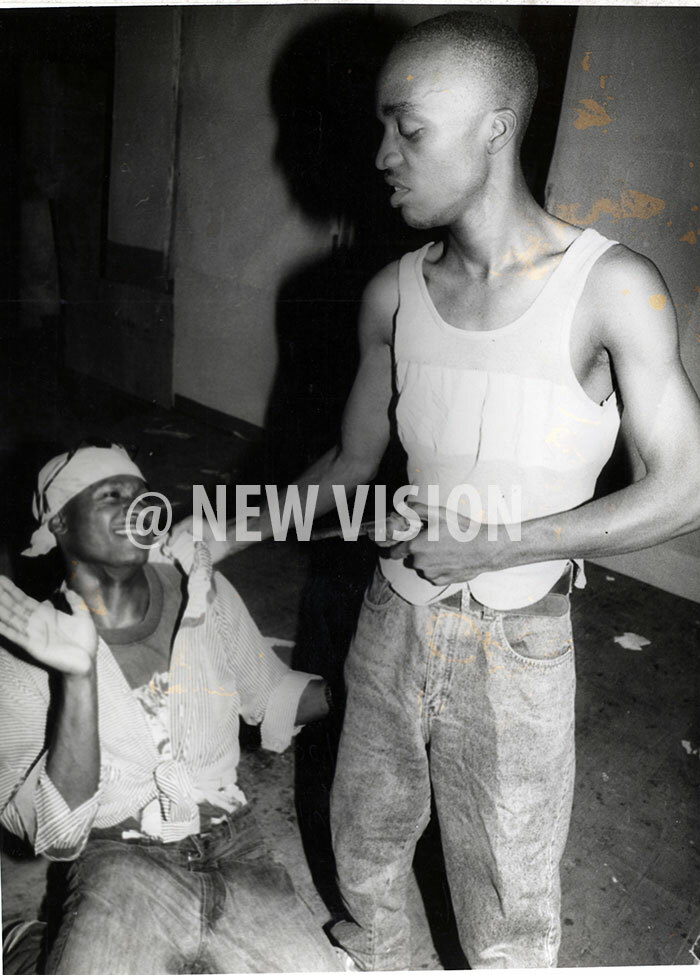 A scene in Affectionate foe. A street thug manhandling his step brother

For our Ugandan theatre, that statement cannot be undermined. Our theatre has been more godly than our churches, it has been more political than our parliament and cabinets. It is no wonder that the colonialists placed our National Theatre building adjacent to the parliament. That was before Okot p'Bitek, as the first black director of the National Theatre, fought tooth and nail to have the expatriates leave the space for the natives. 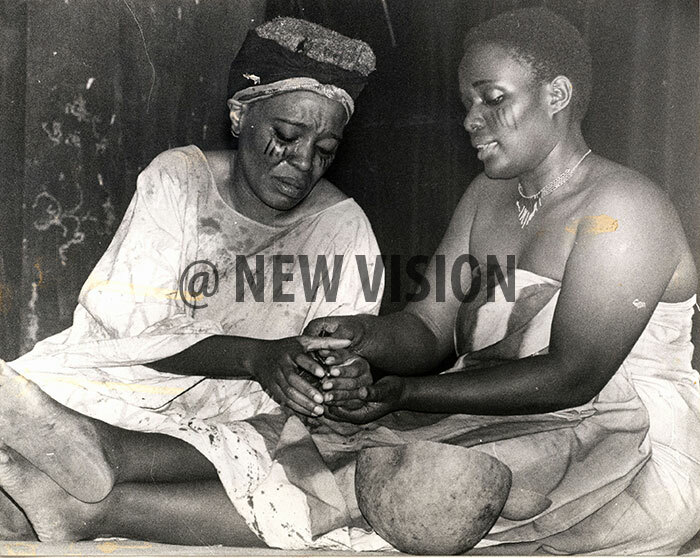 A battered and bruised bride, Nango (Irene Kulabako) (left) gets some tender care from her mother Joan Kobusinge during Teamline's Hands of my People 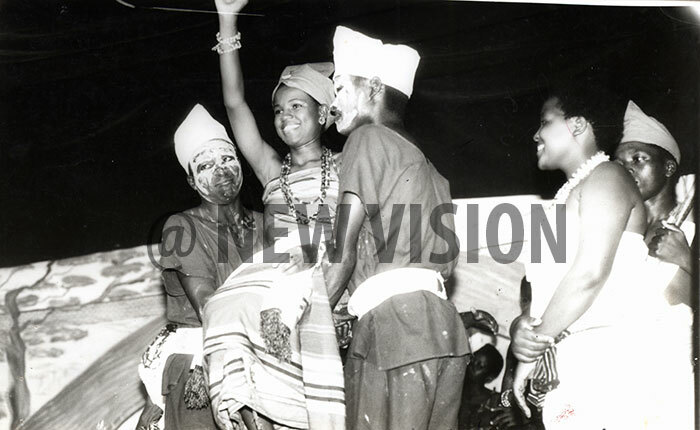 The joy of inheriting a throne. A scene from a play Opera Naswi by Muwonge Mulindwa acted by St Balikuddembe SS Mitala Maria at National Theatre. May 1995 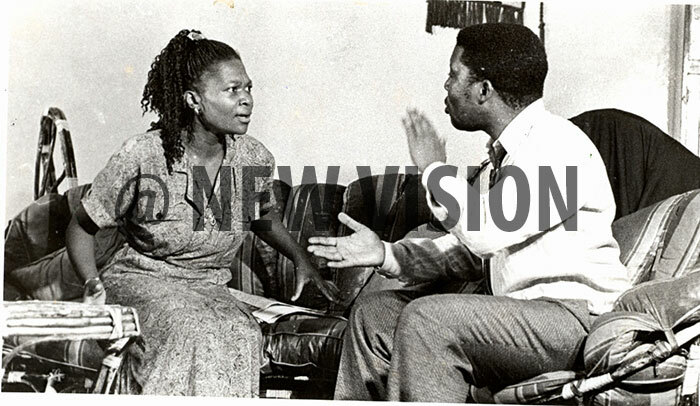 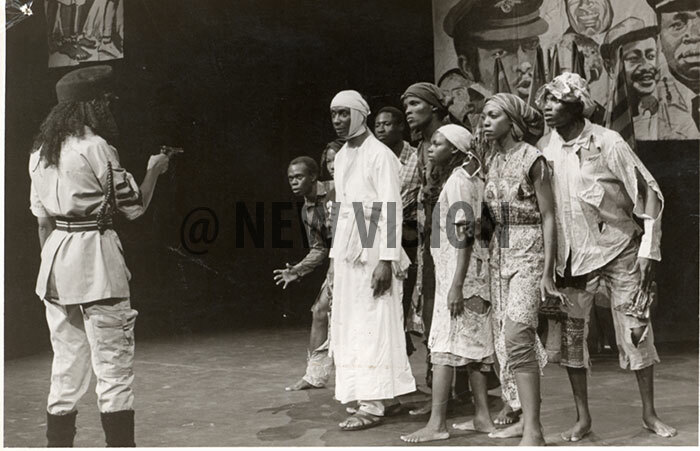 A scene in Alex Mukulu's play, Wounds of Africa

The political drama at those two centres reached its peak in 1977, when secret service army men dragged Byron Kawaddwa from rehearsals at National Theatre and he was never seen again. Kawaddwa was the then director of National Theatre, and had just returned from the FESTAC theatre festival in Nigeria where his play Oluyimba lwa Wankoko (Song of the Cockerel) was well received. The play was deemed an attack on Idi Amin's policies. That is probably the worst thing that has happened to our theatre. The story of Kawaddwa's death remained a black spot on our stage, until a counter narrative of how he met with Ugandan dissidents in Nigeria and someone had leaked information to the security gained ground. 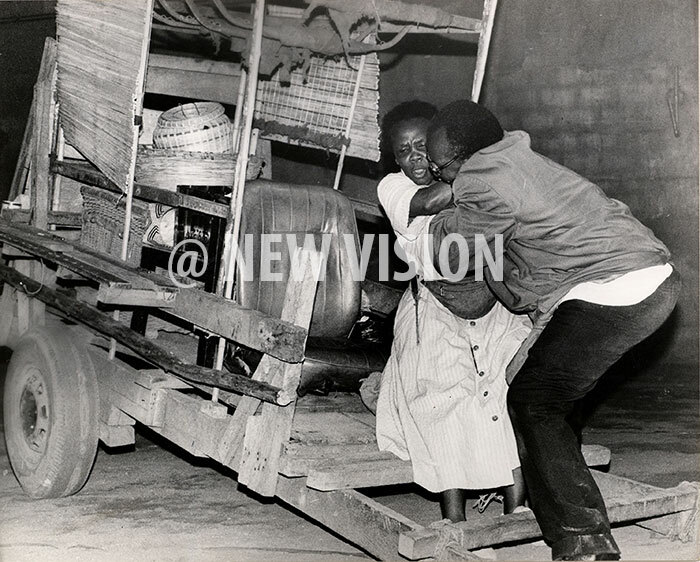 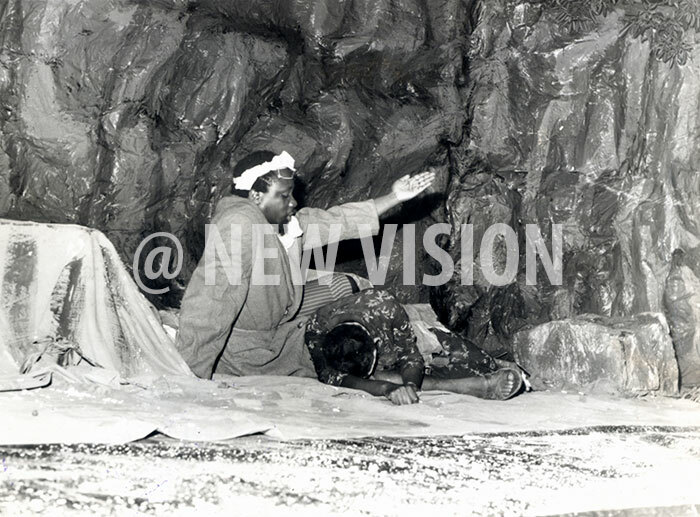 Robert Sserumaga leader of a theatrical group in action. 14.11.71. 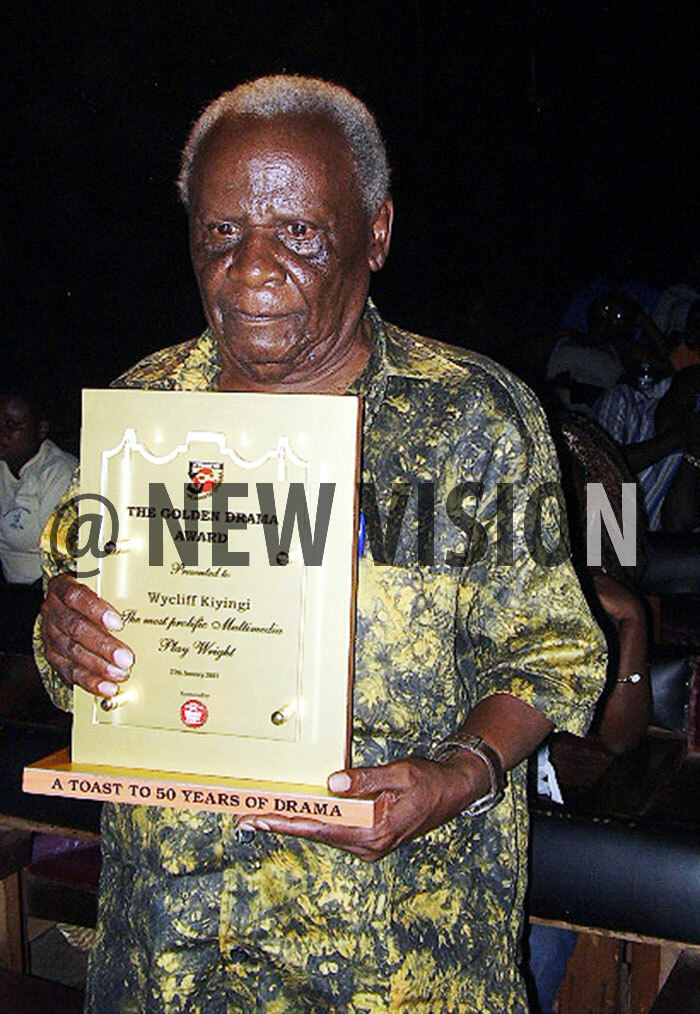 However, it did not stop us from political dramas. It was at around that time that we had political dramas from the likes of Robert Sserumaga (Majangwa) who happens to be the father of Kalundi Sserumaga, once a director of the National Theatre. There was also Wycliffe Kiyingi who was later to pen radio dramas to promote the NRM ideology post 1986. The most popular one was Wokulira. Alex Mukulu, often referred to in legendary terms, also had a number of political hits, including Wounds of Africa, Excuse me Mzungu and 30 Years of Bananas. 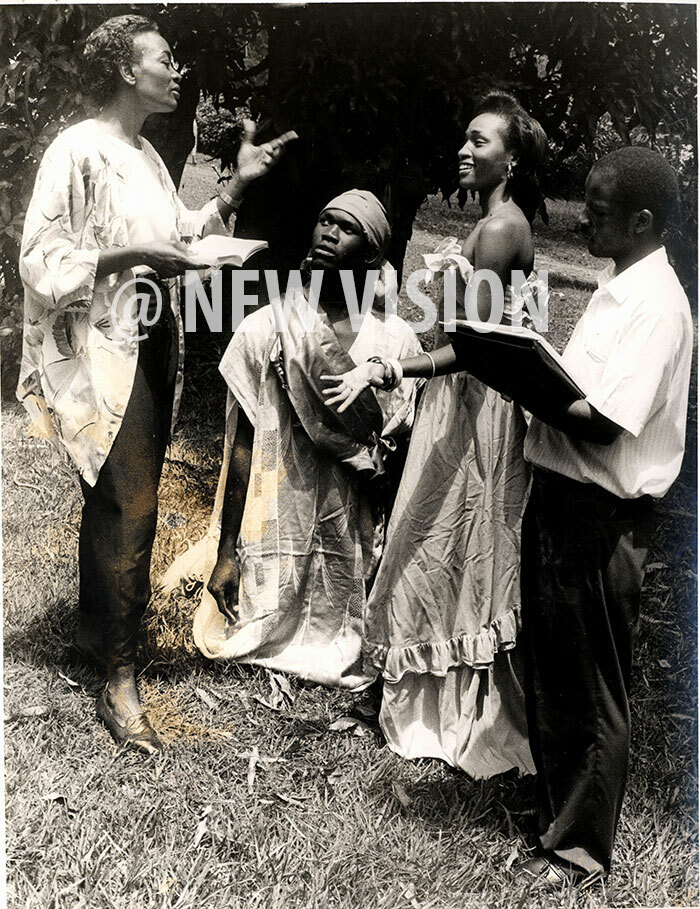 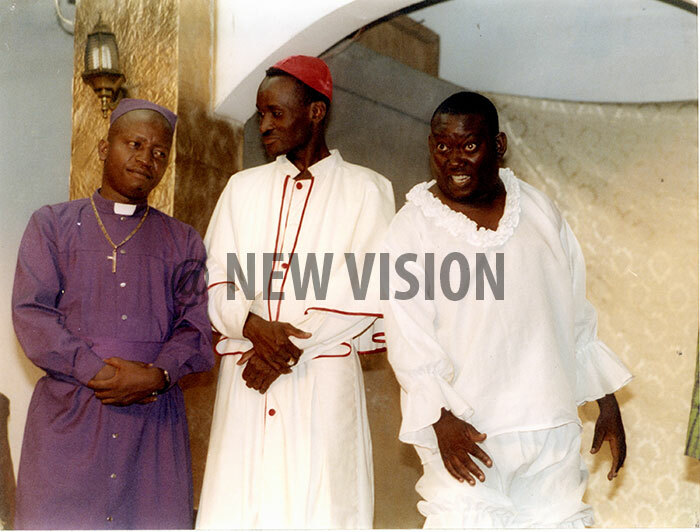 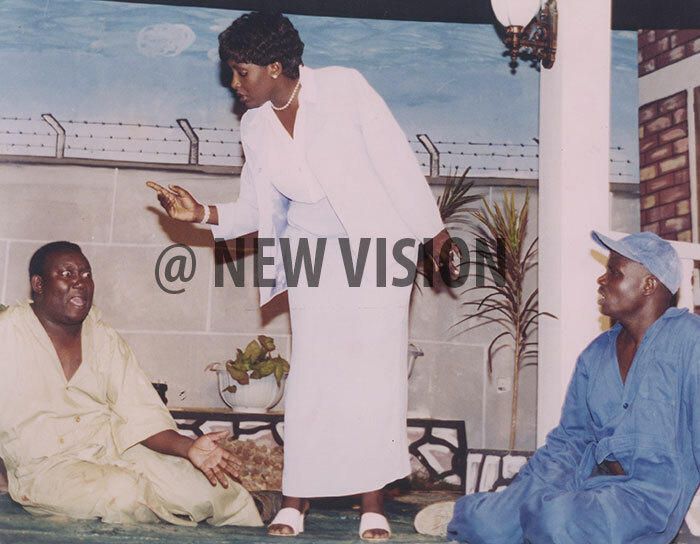 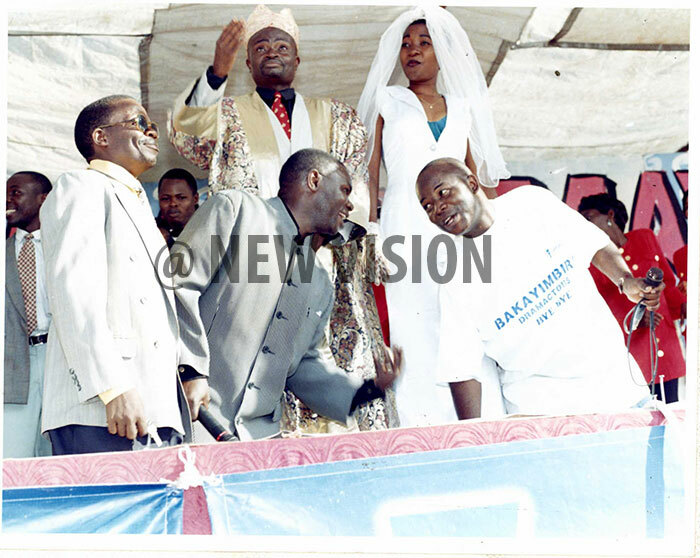 A scene from 'Ziribazaayo', Bakayimbira's farewell play staged at Nakivubo stadium. Can you put a name to the faces

Playwrights and directors were persecuted in different ways. The early 90s era and much of the late 80s saw a growth in farces; very light drama that did not threaten any establishment. You got people into a theatre hall, who laughed for five hours and walked out without a "moral to the story". That was when Bat Valley Theatre (formerly Theatre Excelsior), Pride Theatre, Neeta Cinema-turned-to-theatre gained fame. Groups like The Ebonies, Bakayimbira Dramactors and Afri-Diamonds replaced the likes of Kayayu players that used to present overzealous political plays. It is in this era that the likes of Kato Lubwama, Abbey Mukiibi and Dickson Zzizinga were shaped. The offshoots were actors like Patricko Mujuuka and Ruth Kalibbala, and all the crop of improvisers who never kept to the scripts. 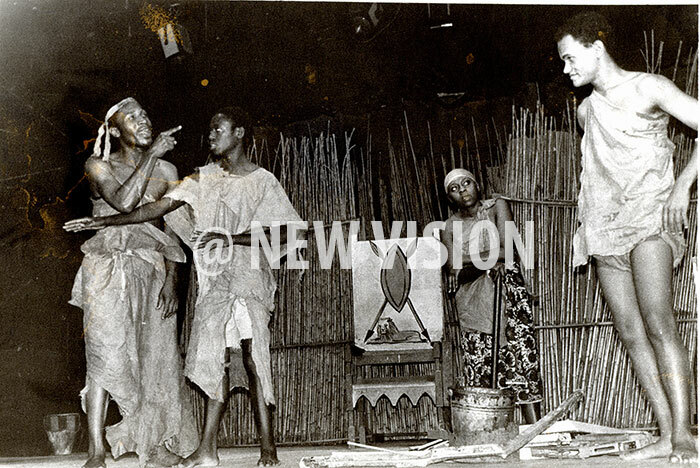 A scene in the Madman in which blacksmith Ewal (right) challenges legendary blacksmith Walukagga to carry out the Kings larger - than - life order. August 1993 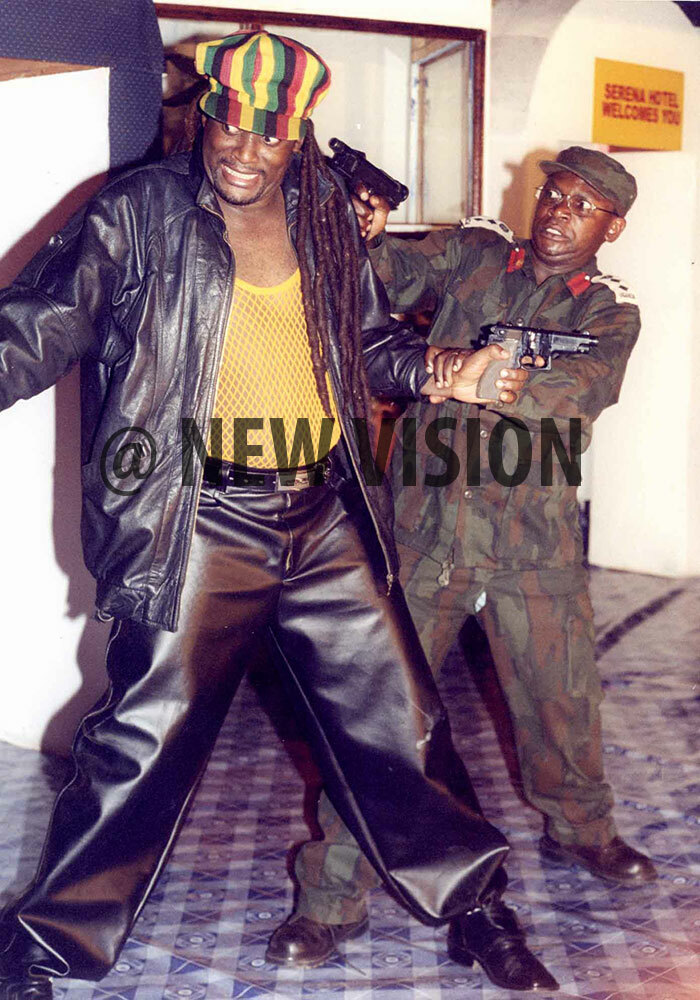 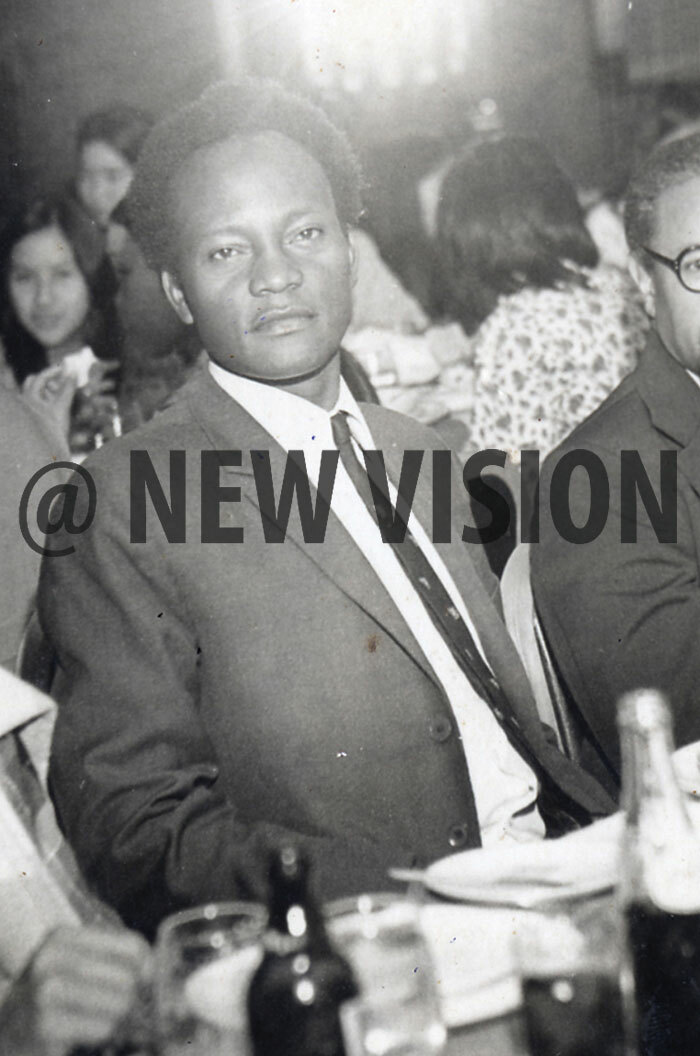 There was so much disruption in theatre in the early 2000s, with all that farce that did not make big statements. It should explain why we easily slid into sketch comedy, then Stand Up. Phillip Luswata, together with a few of his drama students at Makerere University, formed Theatre Factory and we have never stopped laughing since the early 2000s. It was also during that time that the Gospel moved into the theatre, and nearly killed it. 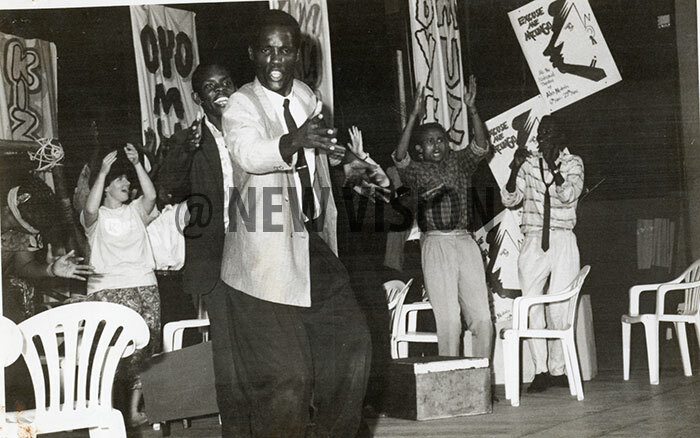 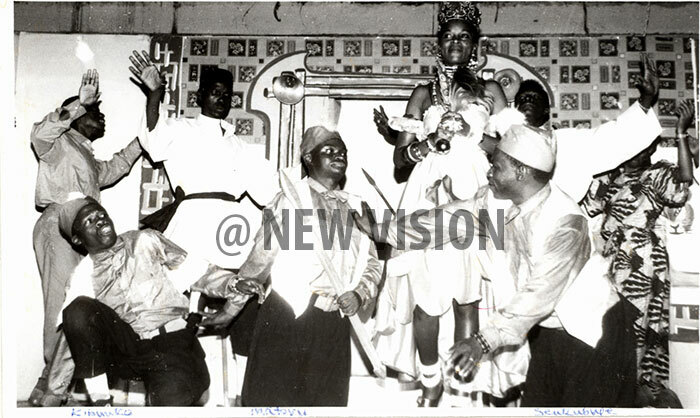 A scene in the play (The Earthquake). The headmaster, Keith Kibirango (left), tries to bribe a UNEB official Lamecka Mukasa