Murder offences contravene sections 188 and 189 of the Penal Code Act and call for a maximum penalty of death on conviction. 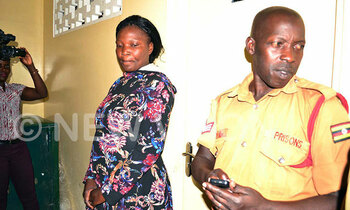 The Director of Public Prosecution (DPP) has slapped murder charges against a labour exporter, Halima Byekwaso, who had earlier been charged and remanded for allegedly cheating and operating a recruitment agency illegally.

However, her application went futile as the state prosecutor, Elizabeth Nandala, told court that the DPP had clouted other charges to her.

Upon state submission, the magistrate read the two charges of murder and trafficking in persons to Byekwaso of which she was ordered not to take a plea, for they are capital offences only tried in the High Court.

"Listen to the charges but you are not entitled to plea to any of the two because this court has no jurisdiction to try such offences.

This also means my court cannot hear your bail application because the new counts against you are capital offences, only tried in the High Court," Acaa said.

This means Byekwaso is now battling four counts of murder, cheating, operating as a recruitment agency without a license and trafficking in persons.

Murder offences contravene sections 188 and 189 of the Penal Code Act and call for a maximum penalty of death on conviction.

Prior to the charges, prosecution said investigations were still ongoing and bidden court to fix the case for mention.

"Your worship, we seek for a short adjournment and the case be fixed for mention as we sum up with the investigations," Nandala said.

This prompted the trial magistrate to adjourn the case to October 28.

"I hereby decline to your bail application and you are further remanded till October 28, 2019, when you will be brought back for mention of your case," Acaa ruled.

The prosecution alleges that Byekwaso and others still at large, on July 2, 2019, in Kampala district, with Sultan Mohamed Al Badi of Sultanate  Oman, in the Middle East, on the South-Eastern end of Arabian Peninsula, recruited and caused the death of late Sarah Achieng.

The accused also transported Achieng to the said Middle East without a license to operate.

It is also contended that on September 10, the accused, being a businesswoman, by means of fraudulent tricks, induced Irene Nankumba to give her $200 ( sh740, 000), as money purportedly meant to process her recruitment opportunity for a job in Jordan, whereas not.

The prosecution further asserts that the accused, without a license to operate a recruitment Agency, introduced herself to Nankumba, as someone appointed by VBC Labour Expert Limited, to recruit girls and boys for jobs abroad, whereas not.

On September 10, 2019, State House Anti-Corruption Unit (SH-ACU) received a tip that Byekwaso who was not licensed to externalise labour was soliciting money claiming that she could externalise people to Saudi Arabia.

Following the tip, SH-ACU with the help of Police arrested her, as a medical test on the person she was to externalise was being conducted.

Achieng, now deceased, was a resident of Kinawabuzi village, Luwoko parish, and Buwungo sub-county in Bugiri district and the repatriation of her body from Oman remains unclear.

Five Ugandan bodies have been returned from Kuwait, Saudi Arabia, and Dubai. The repatriation of the bodies was facilitated by the State House Anti-Corruption Unit (SH-ACU) led by Lt.Col Edith Nakalema, following an appeal from relatives.