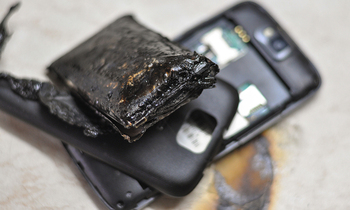 A 30-year-old man has been killed after a mobile phone he was carrying exploded as he travelled to his farm to inspect his cows in Rugaga village, Kikatsi Sub-County, Kiruhura district.

According to the Police, Godwin Mwebesa left his home on October 1, at around 1:00 pm to go to his farm and check on his cows.

Mwebesa, who was riding his motorcycle, a red Bajaj registration number UED 955T, reportedly parked near his farm upon arrival and bent forward to check on himself in the side mirror.

"However, his phone which he was holding in his right hand, touched the cylinder head of the motorcycle engine, which was still hot. It triggered an explosion that shattered the victim's hand and stomach thus forcing his intestines out. He died instantly," a statement signed by the Police spokesperson, Fred Enanga, said.

According to Enanga, security teams from Rwizi Region and Kiruhura district, that comprised of a bomb expert, responded to the incident, visited the scene and confirmed that the mobile phone exploded after it came into contact with the hot engine.

Although incidents of mobile phones exploding are uncommon, the Police warned members of the public to be cautious when dealing with any connected gadgets like cellphones, laptops and remote controls.

"This is simply because blasts can easily occur from any connected device with a battery. This can arise due to overcharging, manufacturing defect, a faulty battery, a processor that is not functioning properly or due to heat generated from another object or combustible substance," he pointed out.

He also urged the public to always ensure all connected devices are kept away from other combustibles, including gas, and to avoid leaving devices plugged in for extended periods of time.

Phone explosions have not been a common occurrence in Uganda, as most of the cases have been reported in countries like the UK and US.