After the fall of Idi Amin, the first Inspector General was David Barlow, whose rather light skin fascinated Ugandas many of whom thought he was an expatriate. 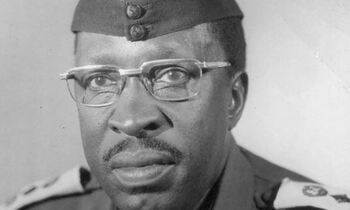 Uganda has had over ten Inspectors General of Police since Independence, some memorable, others were forgettable.

The first African Inspector General of Uganda Police Force was Erinayo Wilson Oryema who took office in 1964. The departing colonialists had identified Oryema several years before independence and started preparing him for the role.

Oryema's played the role of expanding the police and recruiting highly educated cadet officers into the force. He performed it well until the military coup of 1971 when President Idi Amin removed him and made him a minister, and later killed him in 1977.

Benjamin Othieno became Inspector General in 1971 until 1973. He had the challenge of preserving the integrity and duty of the police as the military git busy usurping the mandate of the police in dealing with public issues.

After Benjamin Othieno, came a man who holds a special record, Luke Ofungi. He served as inspector general for three times. Ofungi first became IGP in 1973 until 1974. He again became IGP early 1980 until late 1980; served again from 1986 until 1989. So he served under Idi Amin, then under Paulo Muwanga and also under Yoweri Museveni.

In between, there were several IGP, including one whom Ugandans would rather forget, Kassim Obura, who held the office in the mid-seventies. Obura shot dead a man who was already handcuffed, and after the Amin government fell, he was charged with murder, sentenced and hanged in Luzira. From 1977 until 1979, the force was under Gabriel Odria until the fall of Amin.

After the fall of Idi Amin, the first Inspector General was David Barlow, whose rather light skin fascinated Ugandas many of whom thought he was an expatriate. Barlow was among the first group of Ugandan graduates to join the police as cadet officers at independence  He served under the short-lived government of President Yusuf Lule and later under Godfrey Binaisa. He had the challenge of maintaining order when the Tanzanian military and the unruly Uganda army were more active in the maintenance of public order.

After the disputed December 1980 elections, Okoth Ogola was police chief during the most challenging time when police stations were the target of revolutionary rebels who needed to seize weapons. The unrully army was also meddling intensely in public affairs.

IN 1986, the seasoned professional Luke Ofungi was back at the helm of the police and remained until 1990. The police had been reduced to a skeleton force and this was the time many highly educated officers, today in the high management ranks of the force, were recruited.

Then David Psomgen took the office for a while in 1990. He was succeeded by Apollo Byekwaso who headed the force until 1992. It was during Byekwaso's term that police had to handle the first political unrest in Kampala as the Democratic Party activists kept trying to organise protests, ironically when the internal affairs minister in charge of police was the DP president general, Paulo Kawanga Ssemogerere

In 1992, one of the longest-serving IGPs, John Cossy Odomel, took office. Odomel headed the force until 1999.  He presided over a growing force as the army retreated to the barracks1995 constitutional enactment and the military reduction in force around the same time.

While Kisembo was in office, the Justice Julia Sebutinde Judicial Commission of inquiry probed the police force, identifying many of the problems that bedeviled the force.

After Sebutinde's commission finished, President Museveni appointed a military general, Katumba Wamala, to lead the reform of the police.

Gen Katumba Wamala spearheaded the re-equipping of the police and building its combat capabilities because many criminals were former soldiers and rebels. He set up Operation Wembley which neutralised many armed robbers in the city and the highways. He built good public- police relations and the public contributed freely to the buying of patrol vehicles for the police.

In 2005, the second military general to head the police after independence was appointed. Gen Kale Kayihura is the longest-serving Uganda IGP so far. His first assignment in office was to arrest opposition leader Kizza Besigye.

He has presided over the expansion of the police and has been quashing opposition protests throughout his tenure. His contract was renewed in 2017 for a further three years.

However, he was relieved of his duties a year later and replaced by Okoth Martins Ochola.