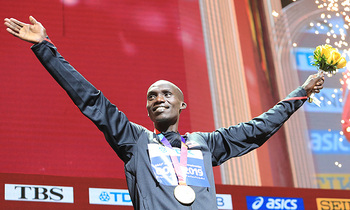 
DOHA - Joshua Kiprui Cheptegei collapsed on the track of Khalifa International Stadium in pure elation seconds after shaking off Ethiopian Yomif Kejelcha on the home straight to win the men's 10,000m final on Sunday, securing a second gold for Uganda in Doha - and a first ever in this discipline. 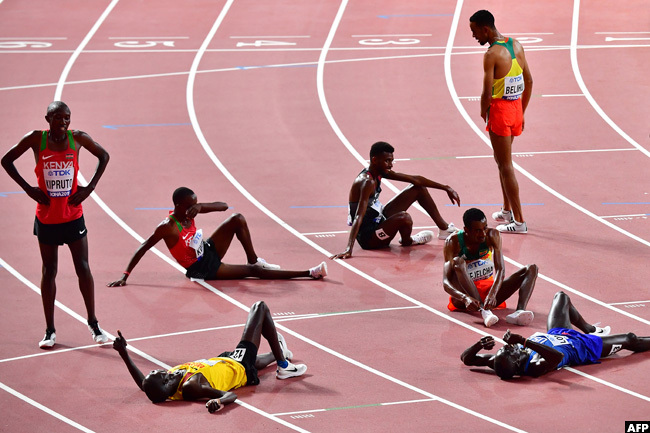 Cheptegei, known for his power in the final stretch of contests, once again timed his race to perfection after a topsy-turvy, entertaining affair involving Ugandans, Kenyans and Ethiopians at the front, to eventually break free of Kejelcha with less than a hundred metres to go.

A gruelling and superbly tactical 25 laps ended with the exhausted yet exhilarated 23-year-old going down on the surface, face up and clenched fists in the air, after crossing the finish line with a world leading time of 26:48.36.

His closest title challenger Kejelcha took silver with a new personal best of 26:49.34 while Kenyan Rhonex Kipruto come through in third in 26:50.32 to secure bronze.

Only six days ago, Ugandans relished a huge serving of yet another world champion in the form of the diminutive Halimah Nakaayi, who stunned a stellar cast to win the women's 800m final, cementing her place in local history books as the only Ugandan to win an 800m medal.

With the 10-day competition still in its infancy at the time, Nakaayi's triumph was a perfect pace setter for Team Uganda. But hope for more medals thinned by the day as Ugandan athletes participating in the various track events dropped off one by one.

The men's marathon on the penultimate day featured 2013 world champion Stephen Kiprotich alongside compatriot Fred Musobo. Eventually, they finished 18th and 13th respectively under the intensity of Doha's nocturnal heat and humidity.

This left Uganda with one final shot at securing another medal - the men's 10,000m final.

And when the 21 athletes stepped out onto the track, Ugandans glued their attention to the screens - keen, hopeful and confident that in Cheptegei, they had a battle-hardened winner.

After settling for silver in the 2017 world championships in London behind homeboy Mo Farah, Cheptegei was back to claim what he had worked so hard for. Was this his time? The event's defending and three-time champion Farah had since retired from the track. A perfect opportunity for Cheptegei to take over.

Another Ugandan in Sunday's final was little-known Abdallah Kibet Mande, who scurried ahead of everyone else when the starter pistol was sounded, to broadcast Uganda's intentions to the watching world. Cheptegei sat in third in the early stages of the 25-lap contest as the East Africans commanded proceedings. 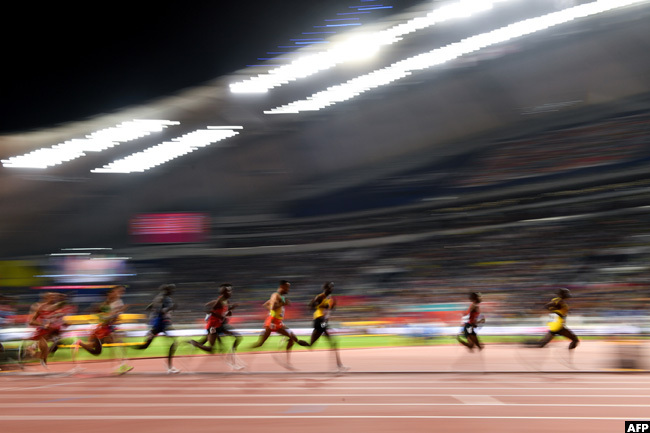 The East Africans were in charge throughout the race

Mande did well to set the tempo of the race in front of a boisterous crowd rallying behind their respective representatives in full voice.

By the first kilometre, it was two Ugandans in front, followed by two Kenyans and then two Ethiopians in the leading pack as the field got stretched out.

Then the entertainment started.

Kenyan Kipruto decided enough was enough and took charge, peeling away to establish a 15-metre lead on the trailing leaders. Then Cheptegei went in front.

In a seesawing affair, the Kenyans were back in the lead 15 minutes into the race as Mande got swallowed into the back, leaving Cheptegei on his own at the front. The lone Ugandan, unshaken, calculated his moves and was soon back in charge on the 6km mark.

On a heavily humid night in Qatar's capital, the thrilled audience inside the grandiose Khalifa stadium bore witness to a topsy-turvy display of endurance running as Kipruto bossed the cast on the 8,400m mark, with Cheptegei in second and Ethiopian Andamlak Belihu in third.

But the final showdown was pruned down to a two-man affair. Cheptegei vs Kejelcha. Or Kejelcha vs Cheptegei, if you like. Uganda vs Ethiopia. Ethiopia vs Uganda.

As expected, the drama started on the bell, which signalled the final lap.

Leader Cheptegei right away felt the heavy breathing of an ignited Kejelcha hot on his heels. It was neck and neck. The Ethiopian tried to kick his long legs past his Ugandan challenger, but this was familiar territory for Cheptegei, who dug deeper into his reserve tank for that gold-winning energy to break free and claim a historic win.

The crowd, many up on their feet by then, had just witnessed another piece of scintillating endurance running

The final act of the race was that injection of an extra ounce of pace by Cheptegei, which clearly broke down indoor mile world record holder Kejelcha. Meanwhile, Ugandan Mande completed the race in 17th place with a time of 28:31.49.

And for Uganda in particular, there couldn't have been a better conclusion to a fruitful championship. Two newly-crowned world champions at the same event and a joint-ninth place finish on the medals table. Memorable! 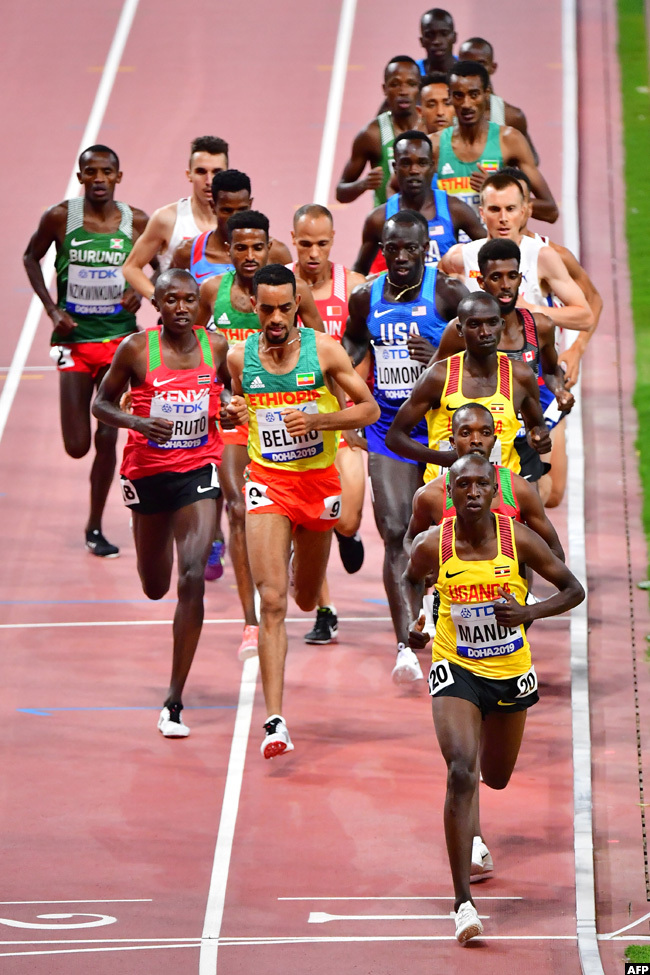 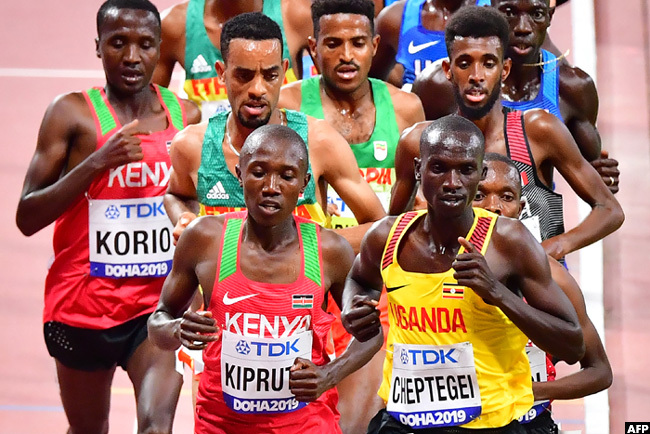 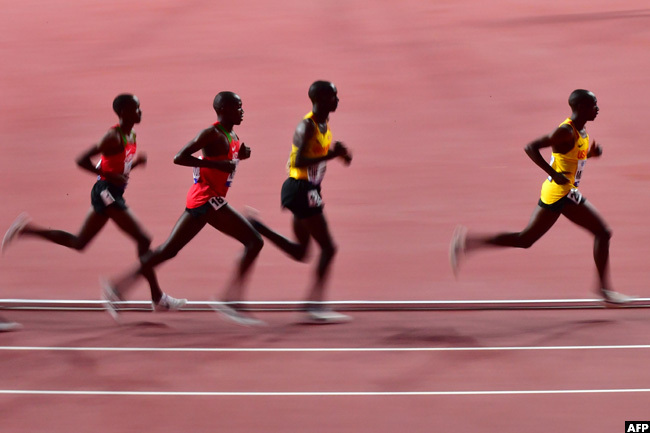 The East Africans shared the lead throughout the 25-lap race 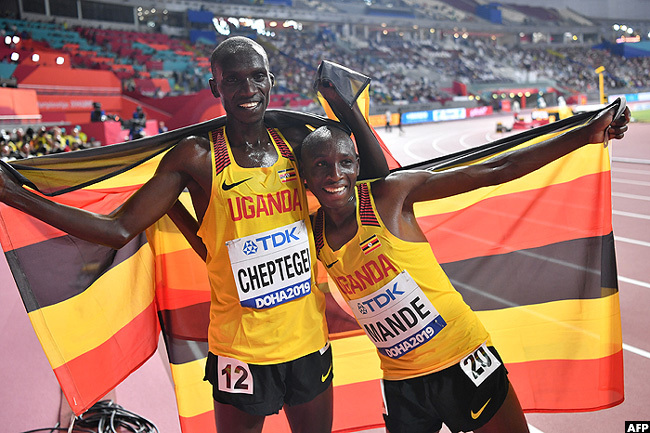 But after an exhausting contest, there could only be one champion . . . 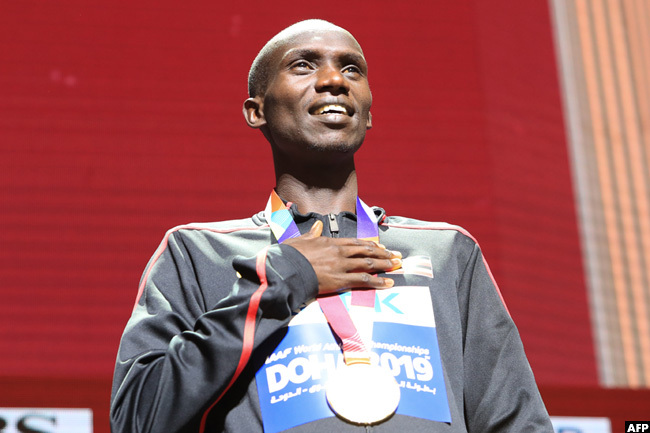 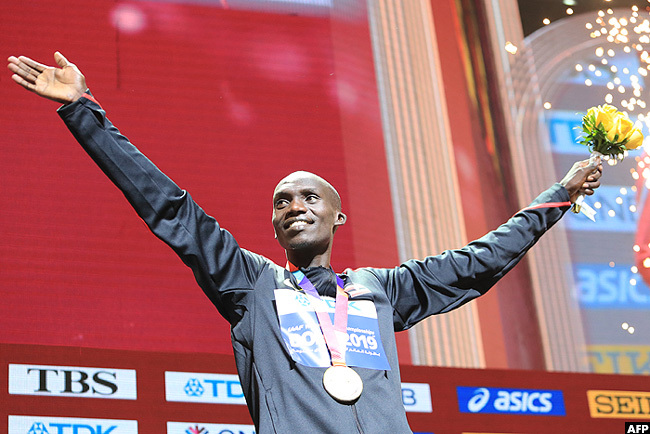 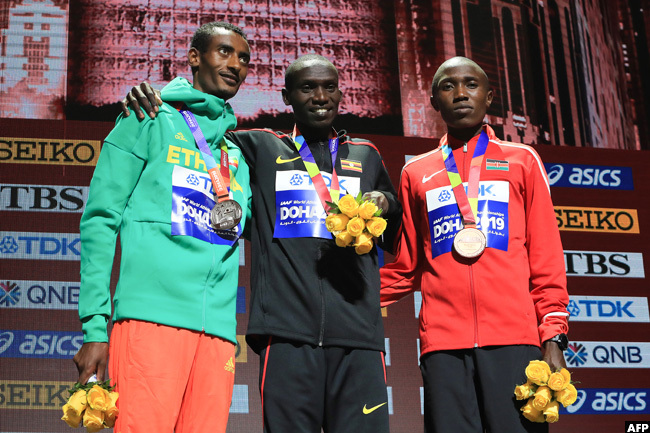