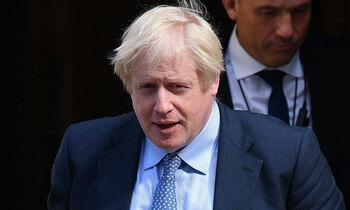 Journalist Charlotte Edwardes wrote in a column for The Sunday Times that Johnson put his hand on her thigh at a dinner party thrown by the magazine he was editing at the time.

"Under the table, I feel Johnson's hand on my thigh. He gives it a squeeze," Edwardes wrote.

"His hand is high up my leg and he has enough inner flesh beneath his fingers to make me sit suddenly upright."

She said a woman she spoke with after the dinner who was sitting on Johnson's other side said the same thing happened to her.

"If the prime minister doesn't recollect the incident then clearly I have a better memory than he does," she tweeted.

The allegation was published just as Johnson's Conservative party gathered for an annual conference focused on Britain's planned departure from the European Union on October 31.

It grabbed the front pages of several left-leaning dailies and became the talking point of the party meeting that Johnson had hoped to use to rally troops ahead of an expected early election.

"An abuse of power," The Daily Mirror screamed in bold print.

"Prime minister forced into denial of claims that he groped two women," The Guardian splashed across its front page.