ACS is seeking $115 million in compensatory damages, and several times that amount in punitive damages 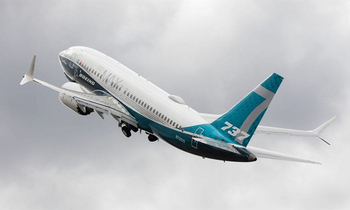 A Russian aircraft leasing company confirmed Tuesday that it has filed the first US lawsuit to cancel an order for 35 Boeing 737 MAX jets.

Avia Capital Services (ACS), a subsidiary of state-owned Russian conglomerate Rostec, confirmed to AFP a report of the lawsuit in the Financial Times, which said it was the first civil action brought by a customer against the US aerospace giant over the 737 MAX.

The FT reported that ACS had filed the suit in Chicago claiming that Boeing had "intentionally" failed to disclose information about the airworthiness of the jet to its customers.

It accuses Boeing of negligence in selling the "defective" aircraft. ACS is seeking $115 million in compensatory damages, and several times that amount in punitive damages, the FT reported.

Rostec said it was ready to help mediate in the dispute.

"Rostec and Boeing are solid partners, with a time-proven and stable relationship. The company is closely following the situation with Avia Capital Services and is ready to help the parties come to a compromise," Rostec executive director Oleg Yevtushenko said in a statement sent to AFP.

"We hope that the issues raised can be resolved through dialogue."

Boeing's 737 MAX was grounded indefinitely after two crashes killed a total of 346 people, one involving Indonesia's Lion Air and the other involving an Ethiopian Airlines jet.

Boeing has developed a software upgrade to the 737 MAX after problems with a flight handling system were tied to the crashes.

But the jet -- the company's best-selling aircraft -- has still not been cleared by regulators for liftoff.

Boeing reported a loss of $2.9 billion for the second quarter of this year, its biggest loss ever as the 737 MAX crisis dragged on.

That was in large part a result of a $4.9 billion charge taken by the company as it negotiates compensation deals with customers.