Akena also wants an apology by the government through the Attorney general and the agents or employees of the defendant who assaulted and battered him. 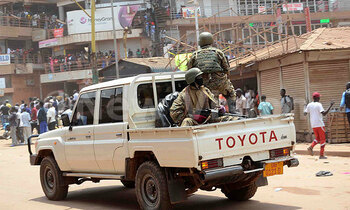 KAMPALA - The Ugandan Photo-Journalist working with Reuters who was assaulted in last year's Kampala protests against the detention of Kyadondo East legislator Robert Kyagulanyi alias Bobi Wine has dragged government to court.

On Tuesday, James Akena filed the suit seeking over sh100m in compensation for confiscated hard cash, camera equipment, cost of treatment, transport, damaged property and loss of earnings from failure to work.

He wants the court to order the government to compensate him for the injuries, pain, and embarrassment caused to him by uninformed agencies.

Akena also wants an apology by the government through the Attorney general and the agents or employees of the defendant who assaulted and battered him.

It is alleged that in August  2018, Akena was in downtown  Kampala City lawfully carrying out his trade as a photo-journalist,  had camera equipment and a media tag identifying him as a journalist.

Akena says at around 11 am, in the area commonly known as Kiseka Market at the intersections of Kyaggwe road and Nakivubo in Kampala his attention was drawn to a loud bang which imminently caused people going about their business in that area to scamper and run for safety.

Court documents indicate that Akena took cover and in a short while got out his camera and begun to take photographs of the events that were unfolding. In a short while, the significantly heavy firing of live rounds of ammunition in the air by several men dressed in the uniform of the Uganda Police Force (UPF) and others dressed in the uniform of the Uganda People's Defence Force (UPDF) begun.

According to the court documents, Akena after taking some photographs, he began to move up to the road in the direction heading towards Kampala Road. As he was moving, he observed several military and police vehicles driving back down the same road, towards the Kiseka market area with heavily armed soldiers on them.

The plaintiff further states that in the company of other journalists, he turned back and moved in the direction the military vehicles had gone to find out what was happening. On the way, he was stopped by a man standing in the company of two armed policemen.

He says the man who appeared to be commanding some of the activities of the security forces in the area, asked him whether he was a real journalist to which he responded in the affirmative.

The victim asserts that he and others began to make their way from the general Kiseka Market area at a place adjacent to Allen Road, he was ferociously approached by three men dressed in uniforms of UPDF and who were armed with guns and sticks.

Akena further indicates that without any justifiable reason or reasonable cause and without provocation or speaking to him they accosted and isolated him and begun to beat him despite entreaties and pleas by him that he was a journalist reporting on activities in the area.

The plaintiff contends that the assault, battery arrest and imprisonment he suffered at the hands of servants or agents of the UPDF and or UPF as such the defendant is vicariously liable.

He pays for judgment against government for special damages, aggravated damages, Punitive or exemplary and general damages.