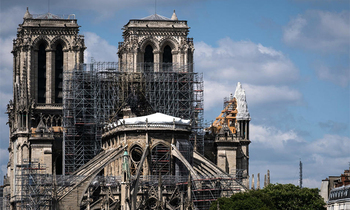 French workers on Monday resumed efforts to secure the cathedral of Notre-Dame following the devastating April fire, after a three-week pause due to the risk of lead contamination.

France's culture ministry told AFP that the works had resumed at 0500 GMT with around 50 people involved.

Restoration of the cathedral after the fire has yet to begin, with efforts focused entirely on securing the building. The culture ministry has warned it is still at risk of collapse.

Efforts to remove lead from the area around Notre-Dame got underway last week after alarm grew over the presence of the toxic metal.

Hundreds of tonnes of lead in the roof and steeple melted during the April 15 blaze that nearly destroyed the gothic masterpiece, with winds spreading the particles well beyond the church grounds.

Residents have accused the Paris authorities of underplaying the risk from the lead although the culture ministry insists safety is the top priority.

But prefect Michel Cadot, the government's top official for the Paris region, approved the resumption of the works after visiting the site.

"I saw that the different recommendations of the labour inspectors had been implemented," he said, adding the decontamination work would help keep contractors safe.

Securing the structure is required before the restoration work can begin.

The culture ministry said that stones had fallen from the nave vault during a heatwave in July.

President Emmanuel Macron has set an ambitious target of five years for the restoration to be finished. But the ministry said restoration work would not even begin until next year.

Paris prosecutors said in June that a poorly stubbed-out cigarette or an electrical fault could have started the fire and opened an investigation into criminal negligence, without targeting any individual.