The UNHCR country representative, Joel Boutroue, said the agency has discontinued funding to the livelihood component of the current refugee action plan due to declining funding. 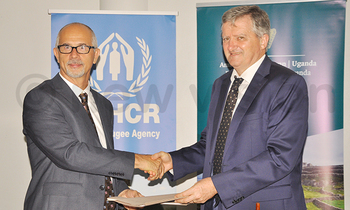 KAMPALA - The livelihoods of refugees who have been receiving planting materials for food production and attending skills training courses could be hit by a heavy blow as the United Nations High Commissioner for Refugees (UNHCR) scales down its operations.

The UNHCR country representative, Joel Boutroue, said the agency has discontinued funding to the livelihood component of the current refugee action plan due to declining funding.

"We can no longer continue undertaking agricultural projects and distributing seeds for planting to refugees. The declining funding does not just affect the wider refugee response, but has a direct impact on the livelihoods of refugees," Boutroue said.

Uganda's refugee approach affords displaced persons plots of land and access to social services. The UN refugee agency country boss said the institution has so far only raised 20% of the $500m (about sh1.8trillion) budget for refugee response for 2019.

But the budget for the bigger response plan, including finances required by UNHCR, and other UN agencies and partners, is $900m for 2019.

"And we have now covered more than half of year, but that is the funding we have. That has meant that we have to scale down our operations. The already poor services are not improving, sometimes, only deteriorating," Boutroue added.

He was speaking on Wednesday during the signing of the memorandum of understating with the Ireland ambassador, William Carlos, for the two million euros (about sh8.2b) his country has committed towards the refugee response in Uganda. The event took place at the embassy of Ireland in Kampala.

Boutroue said the financial support from Ireland to the refuge response comes at the right time when the agency is grappling with funding gaps. This, he added, will contribute to closing some funding gaps.

"I am happy to see that Ireland is committed to burden-sharing in line with commitments of the global compact on refugees. Education and environment are our priorities, along with our core protection mandate," Boutroue said.

However, he noted that huge funding gaps remain and that limited funding is likely to result in deterioration of services and escalate depression among refugees.

"We have cases of refugees who have committed suicide because they could not continue going to schools for lack of resources needed to stay in school. We have a crisis and we are getting these cases every day," Boutroue added.

Carlos said the funding will assist refugees in all settlements by strengthening access to education and vocational training. Part of the funding, he added, will be used to address sexual and gender-based violence over the period between 2019 and 2020.

"The embassy of Ireland is pleased to fund the comprehensive refugee response framework through UNHCR, and highly values partnerships with Government of Uganda and other development partners to improve the lives of the refugees in Uganda," Carlos stated.

According to the UN refugee agency, currently, Uganda is hosting over 1.3 million refugees.  Boutroue said the 2017 refugee solidarity summit hosted by President Yoweri Museveni and the UN secretary-general, Antonio Guterres, raised $500m and that has already been spent on the response.