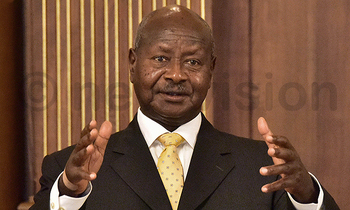 President Yoweri Museveni is expected to address national leaders for both teaching and non-teaching staff of government schools and universities at State House.

The expected associations include the Uganda National Teachers' Union (UNATU) and the National Union of Education Institutions (NUEI).

Don Wanyama the senior press secretary to the President confirmed the developments.

"Yes it is true. The President is expected to address stakeholders in the education sector on Tuesday afternoon. He invited national leaders for lecturers and teachers among others," he said.

However, Wanyama did not disclose the reason for the meeting, adding that; "We will notify the country on what the President communicated to his guests (lecturers and teachers)."

However, other sources who spoke on the condition of anonymity, expect the President to address salaries for both teachers and lecturers in the country.

The meeting comes after a section of lecturers at public universities threatened to withdraw from their duties if issues of salaries are not addressed before the start of the coming semester.

Majority of lecture rooms remained locked with a handful of students loitering within the university compound.

Regardless of this situation, the university opened on August 3 for freshmen to start reporting. The continuing students have already started reporting to their respective residences while the freshmen's orientation is still ongoing.

Reuben Twinomujuni, the senior public relations officer at the university confirmed that there is an ongoing staff strike but the university is open and that they were continuing to receive students.

The freshmen's orientation and bazaar are taking place and the continuing students started reporting on August 12.

Twinomujuni also said that some of the lecturers are working while others had withdrawn from their duties but no one had been suspended.

The President called for a meeting with the lecturers to discuss possible resolutions to help end the strike so that the students are not affected.

When asked about his expectations from the meeting, Twinomujuni was highly optimistic.

"I strongly believe that the meeting today shall bear fruits," said Twinomujuni.