Dr. Jackson Orem, an oncologist and executive director of the Uganda Cancer Institute (UCI), noted that cancer treatment has standard mechanisms across the world. 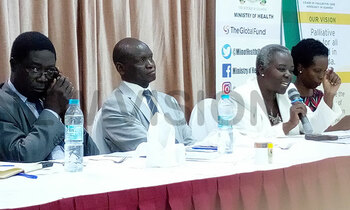 In the face of despair, some cancer patients opt for better treatment services abroad. However, it might not always be practical, a senior specialist has said.

Dr. Jackson Orem, an oncologist and executive director of the Uganda Cancer Institute (UCI), noted that cancer treatment has standard mechanisms across the world.

Orem defended the Institute's competence saying that it is the regional center of excellence model to handle complicated cancers.

"If you are diagnosed with whatever kind of cancer, even if you go to America, the management will be the same. Our aim is quality. We diagnose with two intentions: to cure, and, the quality of life," Orem said.

He narrated that in the last one week, he had received two experiences of highly placed patients who had been receiving treatment in India.

"When they returned, they needed a follow-up at the cancer institute. They were shocked that all the drugs they came back with are in our stores. We have the services here; radiotherapy, chemotherapy, surgery and palliative care," Orem said, adding that the facility has 50 specialists dealing in different kinds of oncology.

He expressed concern that some referrals abroad target the elite class, which makes treatment extremely costly for the ordinary person.

"When people are talking about some hospitals, they forget that they target the rich. For most of these facilities, it is about ambiance. However, our approach is a public approach. We go beyond the ambiance to offer critical care that can be accessible to even the poor," he said.

Attributing it to the mindset, Orem added, "Generally people think that things done outside are better, just like in commerce, we import more than we export."

Orem made the remarks on Thursday August 8, during a breakfast meeting for media practitioners, health ministry, UCI and Palliative Care Association of Uganda. The meeting sought to empower journalists with information on how palliative care is paramount for the realisation of the universal health coverage.

Statistics show a worrying cancer incidence. The 2018 World Health Organisation global cancer observatory statistics show that 32,617 new cases and 21,829 deaths were recorded in Uganda. In the 2010-12 database, the incidence of cancer of 150/100,000 people.

However, in 2017/18 the number has more than doubled to 350/100,000 people. The top diseases registered include cervical, Kaposi sarcoma (masses in the skin, lymph nodes, or body organs), breast and prostate cancers.

In 2016, however, Uganda was under the spotlight after its only radiotherapy machine broke down, leaving patients stranded. Orem revealed that they have since acquired three new machines to help patients access treatment.

"Two of the machines have already been installed and this means we have doubled our capacity. And the third machine, of Trubeam model is the first of its kind in East Africa. It will be installed by next month," said Orem.

"We have also started a training center for specialists in oncology, radiation and palliative care."

Rose Kiwanuka, the country director of the Palliative Care Associations of Uganda explained that the concept of palliative care goes beyond providing relief to physical pain; to also give the patient a support system spiritually and psychologically until death.

Although the cancer burden is rising, only 11%of those who need pain control access it in Uganda, as only 4.8% of public hospitals provide palliative care.

The commissioner of clinical services, Dr. Jackson Amone, said the health ministry was committed to ensuring that people who need palliative care receive it. He cited the example of oral production of morphine (a pain relieving drug) at Hospice Uganda, which is distributed through the National Medical Stores.

"People go to hospital because of physical pain. Palliative care is a multi-sectoral approach," said Amone.