Grain traders ask for support across the value chain

According to statistics, a variety of crops are produced for both domestic consumption and export, with the main emphasis falling on cereals such as maize, finger millet, sorghum, rice, pearl millet, and wheat. 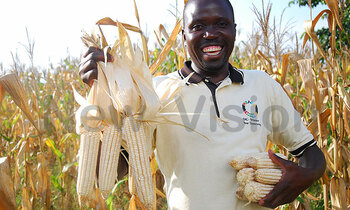 KAMPALA - Industry experts and some investors have over the years considered Uganda to have the best agricultural potential among its African peers, because of its low variations in temperature and two rainy seasons per year.

This means the country can produce all year round on its 5.13 million hectares of arable fertile land, although only about 35% of the land is currently underused.

According to statistics, a variety of crops are produced for both domestic consumption and export, with the main emphasis falling on cereals such as maize, finger millet, sorghum, rice, pearl millet, and wheat.

According to the Uganda Grain Council, more than 95% of the maize produced last year was locally consumed and the rest was sold to the World Food Program (WFP).

The bulk of the maize, according to the grain council, was milled in Kampala by more than 300 mills operating quite informally, each with the potential to mill an average of 10-15 metric tons per day.

"These will buy anything at any price because they need raw materials for their mills. Unfortunately, their potential to turn the grain subsector into a multi-million dollar industry is still under looked by the government and bankers, and so it remains largely under-optimized," said Chris Kaijuka, chairperson of the Uganda grain council.

This was during a recent engagement between the Development Finance Company of Uganda (BFCU) bank and commodity traders from across the country, at the Kampala Serena hotel.

Kaijuka said although financial institutions have of late began working with smallholder farmers; financial support is still needed across the entire value chain to boost production, innovation and stabilizing the market.

"As the grain council, we urge the banks to consider the entire value chain because even if the farmers are supported, but without a reliable market for their produce, it won't work," he said.

He said over the years, they (grain council) have been encouraging their members to spread beyond Kampala, and build bulking centers which also act as centers of excellence providing farm inputs, training and extension services to farmers.

"This has been done, and in the next few months, a few of them will be launched. Our expectation is that these will encourage farmers to increase production since the market and prices will be guaranteed before they plant," he said.

He said if banks could find a way of supporting millers with storage infrastructure to stock at the beginning of the season, it would boost the grain sector's potential and contribution to Uganda's economic development.

"The problem is that when the millers and traders go to banks, they (banks) ask for contracts, yet these grains are traded informally from the millers to retailers," he said.

Documents from the Ministry of Agriculture indicate that Uganda's population is growing at approximately 3.3% per annum, hence pushing the demand for grain consumption up.

According to the ministry, maize is the dominant grain amongst cereals, followed by sorghum. Beans are the dominant seeds among pulses while ground nuts dominate the market among oilseeds.

Mathias Katamba, the dfcu bank chief executive said:" It takes a good understanding of the agriculture ecosystem to provide financial solutions that can stimulate growth along the value chain."

He said normally, banks have structured solutions that are designed to respond to the needs of the different players in the ecosystem, albeit based on their (banks') understanding of that eco-system.

"Our (dfcu) structured Commodity Finance is designed for commodity producers and trading companies, and we believe that the more we understand each other, the more we can help each other," he said.

According to Gerald Low, a Senior Relationship Manager at the Rabobank -Africa, global demand for Uganda produced commodities like coffee is growing, although of late, demand for cereals is presenting a new opportunity for traders.

"Opportunities such as these, however, require tailor-made financial solutions across the entire agriculture value chain from the farm to the market," he said.

Dfcu's head of corporate and institutional banking, Godfrey Mundua said one of the ways to sustain the grain market is by creating a commodities exchange market.

He said once operational, this will drum up demand and benefit all stakeholders in the grain value chain across the country.

"The only challenge we have seen is that grain traders lack sufficient capital to sufficiently meet the demand, and that is why the bank has come up with solutions such as warehousing receipting solutions, leasing for machinery and equipment, and trade finance to support customers," he said.

A commodities exchange market is an open and organised ground where various commodities are traded by recognised members.

Although samples of the commodities are physically examined and graded, the physical delivery of the commodity rarely occurs because the delivery contracts are usually exchanged before their expiration date.

Agriculture is recorgnised by the Uganda government as a source of growth, employment and poverty eradication both in the National Development Plan II and the Vision 2040.

The sector contributes approximately 22.5% to the national gross domestic product (GDP), according to records from the Uganda Bureau of Statistics (UBoS).

It also employs more than 70% of Uganda's population and is as such a major player in the country's income per capita distribution.