Despite the daunting task that awaits them, coach Robert Seguya is optimistic that they can pull a decent result 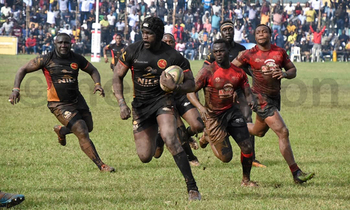 It will be a crunch tie as Uganda take on Zimbabwe Sables in the Victoria Rugby Cup at Legends Rugby Ground today.

History favours the visitors, but the Rugby Cranes are aware of the consequences of losing the game and will be out for a positive result.

Uganda hopes to build on a solitary win against Kenya in the first two games that doubled as the Elgon Cup recently.

A win for the Rugby Cranes will rejuvenate the team's hopes of fighting for the title contested that also involves Zambia.

Despite the daunting task that awaits them, coach Robert Seguya is optimistic that they can pull a decent result.

"We are putting aside the past results. Those were just bad days in business and we are ready for the challenge ahead of us," Seguya said.

The two sides have met 15 times in the 15s version of the sport, and the Cranes have won only five games.

Last year Zimbabwe humiliated Uganda with a 38-18 win and Seguya's charges will be out for revenge.

Flyhalf Ivan Magomu, one of the key players expected to spearhead Uganda hunt for glory is equally focused.

"We are ready and we are going to fight for a win," he said yesterday.

The Sables are always a physical side and Seguya should be in a position to counter that threat before offloading the balls to the backs that has Philip Wokorach, Adrian Kasito and Pius Ogena who are ready to inject pace in the game.

With two skilled kickers Aaron Ofwoyrwoth and Magomu on the pitch, the team should go for points at any opportunity got.

Skipper Asuman Mugerwa, Santos Ssenteza and Ivan Kabagambe must be in a position to contain their opponents during mauls and scrums.

Coming off a convincing 39-10 victory over Zambia, the Sables are looking to keep their momentum.

Coach Brendon Dawson's side comes without experienced Brendon Mandivenga who is injured, but the presence of skipper Hilton Mudariki assistant Jan Ferreira gives him confidence.