People Power has largely entrusted legislators to head the teams in the regions. There are National Resistance Movement (NRM), DP, FDC, JEEMA and independents legislators who have taken up positions in the People Power. 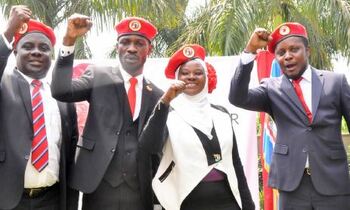 At the function, People Power spokesperson Joel Ssenyonyi said besides the regional co-ordinators, there will also be those from districts, parishes and villages.

The co-ordinators will be accountable to a leadership council headed by Kyagulanyi.

DP a no show
Unlike previous People Power events, this time the top leaders of the Democratic Party (DP) bloc, including Norbert Mao, Michael Mabikke, Abed Bwanika and Samuel Makaku were conspicuously absent.

Also, leaders of the Forum for Democratic Change (FDC), Uganda People's Congress (UPC) and Alliance for National Transformation were absent. At the same event, Kyagulanyi declared his intention to run for the presidency in the 2021 general elections.

There have been media reports that Kyagulanyi had agreed to back former FDC president Dr. Kizza Besigye during the forthcoming elections. But with his declaration yesterday, it appears an alliance between Kyagulanyi and Besigye for a single candidate is unlikely.

Kyagulanyi's strategy
Kyagulanyi said part of his plan is to empower institutions to make them independent. "Instead of big institutions, in Uganda, we have a big personality, something People Power wants to rectify by returning this power to the people, empowering and strengthening institutions so that they can deliver to the people of Uganda," he argued.

People Power has largely entrusted legislators to head the teams in the regions.
There are National Resistance Movement (NRM), DP, FDC, JEEMA and independents legislators who have taken up positions in the People Power.

However, MP Bildad Moses Adome (NRM), named as head of the People Power team for Karamoja region, distanced himself from the group, saying he was not consulted.

In an interview with New Vision, Adome said he had seen the reports, but his appointment was "a presumption by the People Power group that whoever voted against the Age Limit is for them.

"This is not true to some of us," he said, adding that naming him among co-ordinators could jeopardise his roles as an MP from NRM.

"I will request to know what exactly the People Power stands for, what they would wish me to do and what they expect me to do and how it may be of help to the people I lead. Short of the above, I won't be fooled to accept what I don't see light in," Adome added.

Sources said the lineup confirmed a growing rift between Kyagulanyi, and the DP bloc leaders.

They added that some of the DP bloc leaders felt sidelined by Kyagulanyi especially when he named Ssenyonyi as spokesperson without consulting them, and when he held a meeting with Besigye behind their back.

"DP bloc conduct their own activities. We do the same and only notify each other of any developments," he said.

About the absence of key DP leaders from the event, Ssenyonyi said they only invited co-ordinators, although other people turned up as well-wishers.

"That is why DP bloc leaders, who are also People Power co-ordinators, such as Dr. Lulume Bayiga, were present at the press conference, it was not for everyone. Even the party leaders were just notified," Ssenyonyi explained.

Contacted for a comment on the development, Mukaku said naming the co-ordinators is a step in the right direction.

"Kyagulanyi has presidential ambitions and it is good to get people to help him pursue that ambition. I had not seen the list of the co-ordinators before it was unveiled, so to fully accept it, I have to go through it and discuss it with Hon. Kyagulanyi," he added.

"It is now clearer, engagements and strategies are more directed than it was before. They can now identify opponents and allies. I am the vice-president of DP and I can't be a regional co-ordinator, it is so minor, but of course, I am part of People Power. I have heard about the power struggle, but I am still investigating the allegations," he explained.

Meanwhile, the Alliance for National Transformation (ANT) leader Maj. Gen Mugisha Muntu urged ANT members not to be engaged in "controversies over instances where there are colleagues who cut across the Alliance and People Power."