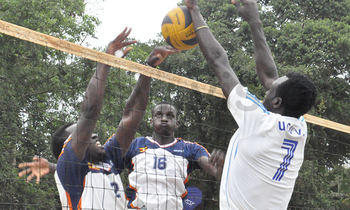 Uganda Christian University volleyball teams for both men and women travel to Ndejje University in Luweero on Thursday for university derby games in the National Volleyball League.

UCU men who are six games unbeaten this season and also last season's runners up are the favourites ahead of the derby.

Nason Bwesigye's boys beat Nkumba 3-2 last week to continue their blistering start to the season and now Ndejje who are without a coach after Johnson Kawenyera left the team at the end of last season, stand in their way.

Amid the coaching crisis, Emma Kato has stepped in to volunteer as the coach.

UCU team captain Moses Odeke said that they have prepared in an exceptional way to scoop maximum points.

"Our game was not pleasing against Nkumba last week though we won. Two points were not what we expected but we need maximum points and we have no excuse because we have prepared very well and will win with three points straight," Odeke said.

However, in the ladies, Ndejje Elites who have registered more wins than the UCU Lady Doves this season are the team to beat.

Ndejje is also last year's league runners up after losing to Nkumba in the final while UCU has not made it to the playoffs since 2014.