Kwesiga, also urged survivors to embrace exercise as a form of therapy and to become stroke awareness advocates in their communities. 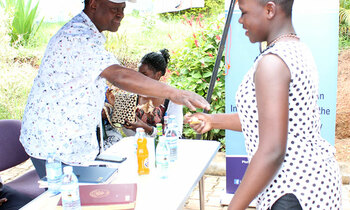 Stroke survivors around Kampala have been urged to avoid self-pity and isolation as they embark on their recovery journey.

The call was made by Prof. Charles Kwesiga, the executive director of Uganda Industrial Research Institute (UIRI) during the closing of a one-week hands-on skills training for stroke survivors that took place at Stroke Foundation Uganda premises in Wampewo, Kampala.

Kwesiga said stroke survivors tend to backslide due to the long road to recovery.

"Use whatever is left of you to progress further in life. Get involved in projects that can make one concentrate and think positively to avoid flashbacks'', Kwesiga advised.

Kwesiga urged the survivors to be role models in their communities and teach other members the skills they have learned to curb unemployment in the country.

Meanwhile, Kwesiga also challenged the caregivers of stroke patients to get involved in the promotion of hands-on skills to fight against unemployment.

Prof. Kwesiga was addressing over 100  stroke patients, caregivers and stroke survivors who took part in the hands-on skill training that lasted for one week at Stroke Foundation Uganda under the facilitation of UIRI, which provided facilitators, machines and raw materials to make items such as shampoo, liquid soap, handcrafts and knitting scarf, sweaters, among others.

Prof. Kwesiga, also urged survivors to embrace exercise as a form of therapy and to become stroke awareness advocates in their communities.