Analysts still see the commodity as vulnerable to oversupply as the outlook for global growth weakens. 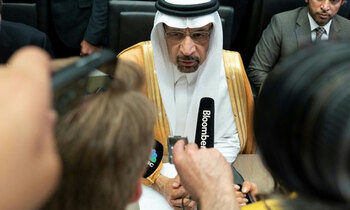 Oil prices fell sharply on Tuesday even as leading crude exporters extended a supply agreement, while global equities mostly nudged higher in the aftermath of the weekend's US-China trade detente.

Benchmark crude prices tumbled more than four percent following the latest agreement among oil producers, confirmed at a meeting of the Organization of the Petroleum Exporting Countries in Vienna and supported by Russia and other exporters.

Analysts still see the commodity as vulnerable to oversupply as the outlook for global growth weakens.

The structural outlook for oil remains "soft," said a note from Morgan Stanley, a position echoed by other experts.

"While the production cut news from OPEC offered decent support yesterday, it wasn't enough to dampen the major concerns regarding demand globally," said a note from BMO Capital Markets.

"There are legitimate market concerns that if demand is truly an issue going forward, then what can OPEC do beyond further cuts."

Meanwhile, equity markets were generally benign as investors continued to express relief that the United States and China had agreed at the G20 to hold off on additional tariffs.

In Europe, the French blue-chip CAC 40 index and Frankfurt's DAX 30 were slightly higher at the close, as London's FTSE index outperformed the pack thanks to a weaker pound boosting exporters.

But trade concerns lingered, limiting gains, especially after Washington proposed tariffs on $4 billion in European imports on items such as cheese and whiskey over European subsidies for commercial aircraft.

"Sentiment appears a bit cautious following the release of disappointing global data and after the US threatened new tariffs on the EU," said Forex.com analyst Fawad Razaqzada.

"But with G20 and OPEC meetings behind us, the focus is turning back to economic data for market participants."

Australia's central bank on Tuesday lowered the cost of borrowing for the second-straight month, bringing interest rates to a new historic low.

In the United States, the Federal Reserve is widely tipped to cut interest rates at its next policy meeting this month but economists say markets may be overconfident of this. A key data point will be Friday's US employment report for June.

The European Central Bank too has expressed openness to additional measures to spur growth. On Tuesday, European leaders nominated International Monetary Fund Managing Director Christine Lagarde to be the next head of the ECB.