No dam will be built at Murchison Falls, says minister

While touring Kapeeka industrial Park, Anite revealed that destroying the falls is the biggest mistake that will not be allowed to happen. 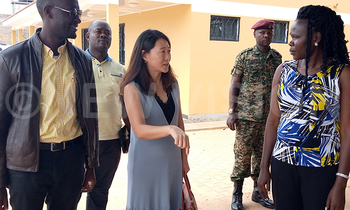 KAMPALA - The State Minister for Privatization and Investment, Evelyn Anite has revealed that no investor will be allowed to destroy Murchison Falls in Kiryandongo district which she says are a national treasure.

While touring Kapeeka industrial Park, Anite revealed that destroying the falls is the biggest mistake that will not be allowed to happen.

"We don't agree with any investor destroying our natural resources. And I don't expect any investor to be licensed to destroy a national treasure like Murchison falls or even operate in a wetland," Anite said.

She revealed that even the feasibility studies on Murchison should stop since the investment is not sustainable.

"I don't see the logic of trying to build a dam in Murchison Falls, yet we all know the importance of these falls. I want to assure the public that the falls will not be destroyed," Anite said.

Although she acknowledges that mistakes have been made in the past where some investors were allowed to establish factories in wetlands, she said this will not happen to Murchison Falls.

"It may not be possible to remove those who are already there, but going forward I don't expect any investor to be allowed in the wetland. We need to treasure our environment and protect it," Anite says.

Early this month, the Electricity Regulatory Authority (ERA) published an advert showing that a private foreign company, Bonang Power and Energy was planning to set up a hydropower plant at the waterfalls.

The independent power producer based in South Africa says it intends to build a 360Megawatt plant.

Several people including the Speaker of Parliament, environmentalist, and tour operators among others have come out to condemn the decision to construct a power plant at Murchison.

Anite revealed that investment needs to be done in consideration of Uganda's treasures and environment.

Although Uganda is said to have enough power supply, reliability remains one of the key challenges that needs urgent redress.

"We have enough power, and I want to assure the country and the investors that we are committed to have steady and reliable supply of power all the time," Anite said.

Her comments on reliable power supply followed a blackout at the factory, which caused burning of materials used in the making of crisps at Gaga Foods factory.

"This is a very big loss; all the ingredients are burnt since the process has been stopped abruptly. Now they have to stop for some time and clean the machines and start again. This power outage happens so often and it is affecting business," said Liu Ming Shu, the director Liao Shen Industrial Park.

At Kapeeka Chinese investors have set up a chain of factories for manufacturing tiles, food and fruit processing, electric cables, electronic appliances, safety garments, and textiles, among others.