The budget projections for financial year 2019/20, can only meet 25% of the needs, leaving the funding of 75% of maintenance needs unmet 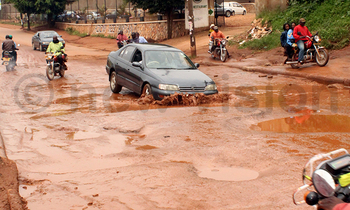 A total of 51,735km of public roads have not been maintained for a number of years, despite an increase in the budget allocation into the development of the roads sub-sector.

An investigation into the state of the roads maintenance in the country has revealed that in the current state, it would cost the Uganda Road Fund (URF) over sh1trillion to repair the roads and three years to clear the backlog.

A report released last month by the Ministry of Finance Budget Monitoring and Accountability Unit revealed if no urgent financial requirement to bring the network back into the ‘fair to good condition' bracket is not done, a sizable part of the road network will have slipped into the rehabilitation realm

"The current road maintenance financing can only meet about 26% of the needs, leaving a big chunk of the road network unattended to. The implication is that over the medium term,  the proportion of roads in fair to the good condition will decrease, while that in poor condition will increase," the report states.

The auditors attributed the problem to inadequate spending on public roads maintenance over the years resulting into increased needs of road maintenance at a rate faster than the increment in available funding.

According to the team, the budget projections for financial year 2019/20, can only meet 25% of the needs, leaving the funding of 75% of maintenance needs unmet.

In the financial year 2017/18, the URF was allocated sh417.394bn of which allocation to road maintenance needs was sh406.7bn, against total requirements estimated at sh1.76trillion, leaving a shortfall of sh1.35 trillion (76.8% of total).

"It can be observed that the unmet needs of road maintenance are steadily increasing at a rate faster than the increment in available funding. This is partly because the funding is not yet linked to road usage which is represented by traffic loading and traffic volume which are both increasing and causing substantial damage to the road network," the report states.

URF Executive Director, Eng. Michael Odongo told New Vision on Monday that although he has not yet received the report, he agreed that the fund receives little money to maintain the roads.

He said to maintain the roads, the Fund requires about sh1trillion a year.

"The government imported road equipment from China and Japan which requires a lot of money to run. Secondly, the traffic is very high on the roads and the recent rains have made the state of the roads worse. So if the government can give us sh1 trillion, I think it will help," he said.

Appearing before the physical infrastructure committee of Parliament early this year, Odongo complained about the budget cut which he said had reduced drastically from sh542.5billion in 2018/2019 financial year to sh36.6 billion in the next financial year.

In the report, the Ministry of Finance warned that in economic terms, poor roads affect trade and commerce, and rehabilitating the roads in the future is likely to be more expensive than a continuous programme of maintenance.

It also warned that the roads are likely to reduce in value. According to the analysis, if not maintained, by 2023, the national roads would have lost value by sh5.4 trillion.

The team called for need for strategic policy adjustments to cause sustainable financing for road maintenance.

They also recommended that the government should make careful adjustments to balance between maintenance and construction.

"The available funding should be increased and sustained at a critical level to force a steady decrease in total maintenance needs. The funding should be linked to road usage through introduction of road user charges envisaged in the URF Act," the report states.

In Uganda, although there has been a steady increase in the road sub-sector budget, however, road development still takes the biggest share of the budget, at 90%, while road maintenance is now at 7% of the total budget.

Uganda's classified road network funded by the Uganda Road Fund (URF) is 107, of which 20,552Km for Uganda National Roads Authority (UNRA) and 86,468Km for Districts, Urban and Community Access Roads (DUCAR) under the Local Governments' jurisdiction.