Here is a timeline of events in Sudan 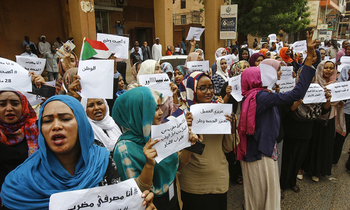 Sudanese protesters began a national strike on Tuesday to pressure the military to hand power to civilians, five months into mass protests that have rocked the African nation.

Here is a timeline of events in Sudan, where veteran autocrat Omar al-Bashir has been toppled and dozens of people killed since the first demonstrations in December.

Protests erupted in various cities on December 19, 2018, against the government's decision to triple bread prices.

They quickly spread, morphing into calls for Bashir to quit after three decades of iron-fisted rule.

Clashes break out as police try to disperse the crowds. Eight demonstrators are killed in two cities, the first of dozens of deaths in protest-related violence over the following weeks.

On February 22, Bashir declares a nationwide state of emergency. He swears in a new prime minister two days later, as riot police confront hundreds of protesters calling for him to resign.

On April 6, thousands gather for the first time outside military headquarters in Khartoum, chanting "one army, one people" in a plea for the military's support.

They defy attempts by police to dislodge them with tear gas and gunshots fired into the air.

On April 11, authorities announce Bashir has been removed from power and that a transitional military council will govern for two years.

Elation at the ouster of Bashir turns to anger as the protesters accuse the regime of keeping in place "the same old faces". Thousands remain camped outside army headquarters.

On April 14, protest leaders hand the new military rulers a list of demands, topped by the immediate transfer of power to a civilian government.

Two days later, Bashir is moved to a prison in Khartoum.

Sudan's military rulers hold the first round of talks with protest leaders on April 20.

There is a breakthrough on April 27 when the two sides agree to establish a joint civilian-military ruling council.

However, differences remain over the composition of the council, with each side demanding a majority.

Huge crowds throng the capital on May 2 as protest leaders say the army is not serious about handing over power.

On May 13, with negotiations advancing, six are killed in overnight clashes in Khartoum.

Two days later, Sudan's army and protest leaders say they have reached a breakthrough agreement on transitional authorities to run the country.

But at least eight people are injured when security forces fire on protesters at the sit-in.

On May 20, new talks between the military rulers and protesters fall apart over whether the transitional body should be headed by a military or civilian figure.

On May 28, protesters begin a two-day national strike to pile pressure on the military to hand power to a civilian administration.