Sudan Islamists to rally against protesters' silence on sharia

The alliance, an umbrella for the protest movement, last month handed the army rulers its proposals for a civilian-led transitional government 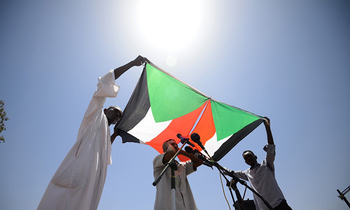 Sudanese Islamist movements said they will rally Saturday against a roadmap by protesters seeking civilian rule that makes no mention of Islamic sharia law in the country.

"The main reason for the mobilisation is that the alliance is ignoring the application of sharia in its deal" with the army rulers for installing a civilian administration, said Al-Tayieb Mustafa, who heads a coalition of about 20 Islamic groups.

"This is irresponsible and if that deal is done, it is going to open the door of hell for Sudan," Mustafa told AFP.

The army rulers and the Alliance for Freedom and Change that brought down veteran leader Omar al-Bashir are engaged in talks to set up a civilian rule in Sudan, but these negotiations have sidelined the Islamists.

The alliance, an umbrella for the protest movement, last month handed the army rulers its proposals for a civilian-led transitional government.

But the generals expressed reservations over the alliance's roadmap, singling out its silence on the constitutional position of Islamic sharia law, which was the guiding principle of all legislation under Bashir's rule.

The protest movement says the issue of sharia was "irrelevant" at this stage and can be discussed later as installing a civilian administration was their main demand.

"The military council should not consider the Alliance for Freedom and Change as representative of" the Sudanese people, said Mustafa.

He accused the alliance of having "stolen the revolution in broad daylight" and said the demonstration was aimed at denouncing "the new civilian dictatorship".

Hardline cleric Mohamed al-Jazuli said Saturday's rally would take place outside the presidential palace in downtown Khartoum after the iftar meal that breaks the dawn-to-dusk fast of Ramadan.

Meanwhile, the army rulers said they will resume talks Sunday with protest leaders which they had suspended three days earlier.