French want Notre-Dame rebuilt as it was: survey

Only a quarter support the idea that the rebuilding should include a modern "architectural gesture" championed by French President Emmanuel Macron, while a further 21 percent of those surveyed by YouGov for two French media outlets had no opinion. 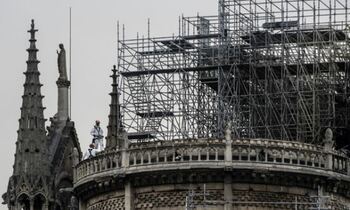 FRANCE - A narrow majority of French people want the fire-ravaged Notre-Dame cathedral to be rebuilt exactly as it was, a survey said Tuesday.

As the French government prepares to push through legislation that aims to reconstruct the famous Paris landmark within five years, the poll showed that 54 percent of French people want it restored to just as it was before the devastating fire on April 15.

Only a quarter support the idea that the rebuilding should include a modern "architectural gesture" championed by French President Emmanuel Macron, while a further 21 percent of those surveyed by YouGov for two French media outlets had no opinion.

France has launched an international architectural competition for the reconstruction of the cathedral's 19th-century spire, which collapsed into the nave during the inferno.

But Macron's insistence on a speedy restoration of the gothic masterpiece has raised the hackles of conservationists.

More than 1,100 French architects and heritage experts signed an open letter earlier this week warning the president of the dangers of taking hasty and "precipitous" decisions.

"Let's take our time to find the right path and then set an ambitious deadline for an exemplary restoration," they urged.

Donations to help rebuild the cathedral have poured in from around the globe, with the total now topping 850 million euros ($954,000).

The debate has now shifted as to how the Gothic cathedral should rise from the ashes.

Some argue for an exact historical restoration while others claim modern methods and techniques should be used on a building which has evolved over the centuries. Construction of the Paris landmark began in the mid-12th century

French MPs are poring over the new law which would relax tender and some heritage rules to help speed the restoration, and are likely to start debating it on May 10, a source told AFP.

The law would also give tax advantages to donors and set up a public body to oversee and carry out the work.

The YouGov online poll was done between April 26 and 29 on a sample of 1,010 French adults.