Osagie assured Ugandans to shift attention to how they will manage the vast revenue that will come from the success of oil. 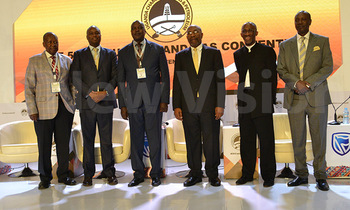 KAMPALA - Ugandans have been urged to calm their anxiety for the first barrel of oil. The remarks were made by a Nigerian expert on oil and gas, Hakeem Belo Osagie.

Osagee used to be the main shareholder of the Nigerian based United Bank of Africa that has branches in Uganda. He is also a former petroleum economist in Nigeria.

Currently, the chairman of Metis Capital Partners, Osagie has assured Ugandans that the first barrel of oil in Uganda will come as it did in Nigeria, but Ugandans need to shift attention to how they will manage the vast revenue that will come from the success of oil.

The remarks were made during the Oil and Gas Convention 2019 organised by the Uganda Chamber of Mines and Petroleum, the Ministry of energy and mineral development and Stanbic Bank.

Osagie said there were two things people were worried about; the capacity in education and skills and whether the country has the resilience to carry out long term projects successfully.

He urged government to support Ugandans' participation in the oil and gas industry.

He further revealed that Nigeria got late with local content and the citizens missed out on the side industries, spin offs and businesses and various services from the industry.

He thus cautioned the country against letting a small group of powerful businesses or companies dominate the industry that benefits at the expense of the country.


He cited the case of Nigeria, where the construction of the fourth refinery was over- priced by experts at $1b. When bids were tendered in open competition, the refinery was constructed at less than half the price $515m against estimated by experts.

The Government last August signed an agreement with a consortium of American and Italian firms to finance and construct the $4b (sh14.9trillion) oil refinery in Hoima district. He noted that the figure looked high for the small refinery.

"Nothing beats competition in getting the best price," he said. He advised against trying to execute a perfect plan to run the industry because it slows progress but instead have a good plan solving as many problems and tackling more as they emerge.

He said the country needs to hire the bright and outstanding individuals and pay them well to run the industry.

"The public sector pays low salaries so the best bright individuals will work for the private sector that pays better. In Nigeria we had to pay people working in the sector better to attract them to negotiate the best contracts are negotiated and work done well," he said.

He said that when the oil cash starts flowing for the industry to succeed there has to be a smooth cooperation between the finance ministry that controls the budget and the central bank that controls foreign exchange management.

"Nigeria has over the years struggled to achieve cooperation across our government finance the oil sector," he said. He underpinned that good leadership in the county and in the petroleum sector was important for the success of the sector.

Patrick Mweheire, chief executive officer Stanbic Bank said many SMEs in Uganda are collapsing because they do not keep records, they have no governance structures, and they do not separate the roles of family members from the firms. You find in SMEs the wife is the treasurer.

He said they are working to see efficient operations between the public sector and private sector.

Elly Karuhanga, chairman Uganda Chamber of Mines and Petroleum said many Ugandans have begun participating in the oil and gas sector.

He said many local companies have registered with the Petroleum Authority of Uganda making up 60% of the companies registered.

Rugunda said the down to earth handling of issues in the oil and gas sector has done much to encourage good will in the sector.

"The discovery of oil came with its own challenge and immense gaps, such as skills, infrastructural, legal and institutional, among so many others," Rugunda said.

"We can confidently say that we have carefully put our house in order ahead of commercialization.

This has often times been looked as delaying but in actual sense it has been a continuous preparation process.

There is no short cut for a country whose agenda is sustainable exploitation of natural resources in order to create lasting value for society," he added.