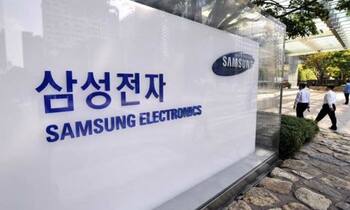 Samsung Electronics, the world's biggest smartphone and memory chip maker, reported a slump in first-quarter net profits Tuesday, in the face of a weakening chip market.
Net profits in the January-March period were 5.04 trillion won ($4.3 billion) -- the lowest since the third quarter of 2016 -- it said, down 56.9 percent year-on-year.
The firm is the flagship subsidiary of the giant Samsung Group, by far the biggest of the family-controlled conglomerates that dominate business in the world's 11th largest economy, and it is crucial to South Korea's economic health.
It has enjoyed record profits in recent years despite a series of setbacks, including a humiliating recall and the jailing of its de facto chief.
But now the picture is changing, with chip prices falling as global supply increases and demand weakens.
It also has to contend with increasingly tough competition in the smartphone market from Chinese rivals like Huawei -- which in 2017 surpassed Apple to take second place -- offering quality devices at lower prices.
"Mobile displays suffered slower demand and intensifying competition with LTPS LCDs," the company said in a statement.
"Large displays also took a hit from a continued decline in LCD panel prices amid weak seasonality."
Samsung launched its top-end S10 5G smartphone earlier this month after South Korea won the global race to commercially launch the world's first nationwide 5G networks.
But last week it made a high-profile decision to delay the release of its $2,000 foldable smartphone after reviewers provided with early devices reported screen problems within days of use.
While Samsung's device was not the first folding handset, the smartphone giant was expected to help spark demand and potentially revive a sector that has been struggling for new innovations.
Samsung supplies screens and memory chips for its own smartphones and Apple, and server chips for cloud companies such as Amazon.
The figures come after South Korea's SK Hynix, the world's second-largest memory chip maker, also saw operating profits plunge more than two-thirds in the first quarter.