Presenting their position paper on tax revenue measures for the 2019/20 financial year to the committee on Thursday, the CSOs recommended that the current 12% or sh200 is maintained or increased to enable the government collect more taxes for the development of the country. 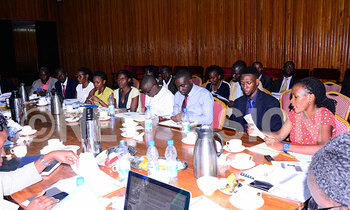 KAMPALA - Members of the civil society organizations (CSOs) have implored the Parliamentary committee on finance planning and economic development to increase the tax on non-alcoholic beverages such as soda and energy drinks.

According to the Income and Excise duty Tax (Amendment) Bills 2019, tabled before parliament, the government wants parliament to amend schedule 2 of the Principal Act Item 5 (a) by reducing the excise duty on non -alcoholic beverages.

However, the CSOs under their umbrella group, the Tax Justice Alliance Uganda, want the taxes increased or maintained at 12% saying sodas and energy drinks are luxurious drinks with negative effects on the health of Ugandans.

"Non-alcoholic beverages such as soda, energy drinks and non-fruit juices are goods, which with increased consumption could negatively affect the health of the consumer. Furthermore, the reduction in the tax will lead to a tremendous loss in government revenue," Regina Navugga, a programs officer at SEATINI-Uganda told MPs.

Presenting their position paper on tax revenue measures for the 2019/20 financial year to the committee on Thursday, the CSOs recommended that the current 12% or sh200 is maintained or increased to enable the government collect more taxes for the development of the country.

In their proposals to improve revenue collection and facilitation of investments, the Tax Justice Alliance Uganda, also proposed an amendment of section 5 of the Income Tax Act to require a person earning from rental income to pay tax for each property separately.

"Section 25 of the Income Tax Act should be amended to exclude financial institutions and insurance services from those that have a cap on the interest that can be deducted while computing tax payable," Navuga said.

The Tax Justice Alliance Uganda also proposed the amendment of section 38 of the Act, to impose a tax of 0.5% of the total turnover for a taxpayer who carries forward losses consecutively for seven years.

They, however, opposed the seven years period as proposed by the government saying it should be reduced to only five years.

The CSOs noted that the tax losses are not necessarily business losses adding that some of the companies make profits but because of the many statutory deductions and abuse of privileges, taxpayers reduce their chargeable income to negative.

"We propose that the period over which a company is allowed to consecutively carry forward losses is reduced to five years to minimize revenue loss," Navuga said.

The CSOs which comprised of members from organizations such as the Civil Society Budget Advocacy Group (CSBAG), Uganda Debt Network, SEATINI Uganda and Oxfam among others, implored the government to develop a mechanism to verify losses through an audit to prevent the perpetual declaration of losses.

They said the government should also be able to develop a schedule with an estimate of the rate of return of investment in different businesses.

"This will enable Uganda Revenue Authority (URA) to assess the viability of businesses, which have continuously declared losses but have remained operational," Allan Muhereza, a member of Tax Justice Alliance Uganda told the MPs.

The committee, which is currently scrutinising the Tax Bills welcomed the proposals by the CSOs saying they will guide parliament in amending the tax laws for revenue generation.

However, some MPs opposed the rental income tax saying it would kill businesses which are the main source for local revenue generation.

"Tax policies should not affect people engaged in businesses. The more we provide clear space, the more we attract businesses which businesses pay more revenue. We need to look at these taxes well not to constrain business to survival," Amos Lugolobi, the Budget committee chairperson said.