A lot at stake as Uganda hosts Africa T20 finals 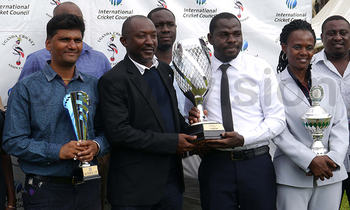 Qualification for the ICC T20 World Cup is the Holy Grail for Uganda Cricket Cranes.

Another opportunity is here for Roger Mukasa and co. when Uganda hosts the finals of the ICC Men's T20 World Cup Africa Qualifier next month.

Uganda seeks to offset a poor background in the pathway to the World Cup, which they have not been to since its inception in 2007.

Conversely, in terms of hosting ICC events, the country has been here before, with the ICC World Cricket League Division Three in 2017 and the Victoria Tri Series the latest events on the ever-growing list.

"We are strongly working towards drawing bigger crowds and massive activations as we intend to provide a great atmosphere at all games," said Paul Kaheru the LOC chairman on Tuesday at Lugogo during the official launch of the tournament.

The hosts come into the competition with the level of confidence they need, having finished second behind Kenya in the Africa Region B qualifier last year in Rwanda.

Uganda opens her campaign against Kenya in the six-nation showpiece.

Although the final team is yet to be announced, Uganda's target is very clear; finishing among the top two in the round-robin contest to progress to the global qualifiers November in UAE, the final phase ahead of the 2020 T20 World Cup.