One of the Democratic Republic of Congo's political heavyweights, he left the country in 2016 after falling out with the then president, Joseph Kabila 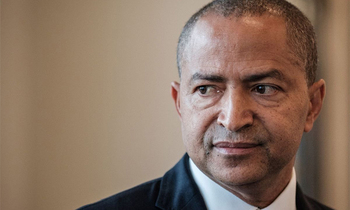 A court in DR Congo has scrapped a three-year jail term against opposition leader Moise Katumbi, enabling him to return home from self-imposed exile in Belgium, his lawyer said Friday.

The decision by the Court of Cassation -- the supreme court of appeal -- overturns a sentence for alleged property fraud, "opening the way for his return," attorney Joseph Mukendi said.

One of the Democratic Republic of Congo's political heavyweights, Katumbi, 54, left the country in 2016 after falling out with the then president, Joseph Kabila.

Kabila stood down in January after 18 years in power in which he stayed two years beyond his constitutional maximum term in office.

He handed on to opposition leader Felix Tshisekedi in the country's first peaceful political transition since independence from Belgium in 1960.

Katumbi, a wealthy businessman born to a Greek businessman father and a Congolese mother, tried to return last August to file his bid for the December presidential elections.

But he was prevented at the Zambian border from crossing into the DRC. Candidates have to be physically in DR Congo to submit their election application.

Fayulu came in a close second to Tshisekedi, according to results that Fayulu lashed as a stitch-up.

Katumbi has his power base in the mining province of Katanga, in the southeast of the vast country, where he was previously a governor.

In June 2016, a court in Katanga's provincial capital, Lubumbashi, handed him a three-year jail term in absentia for alleged property fraud, with the instruction that he be arrested immediately if he set foot in the country.

He was also accused of hiring several foreign mercenaries to act as his private guards. He has denied both charges.

In the months before the presidential elections, the authorities also accused him of "usurping" Congolese nationality.

They said Katumbi had acquired an Italian passport and thus had forfeited his right to Congolese citizenship. Dual citizenship is illegal under DR Congo law.