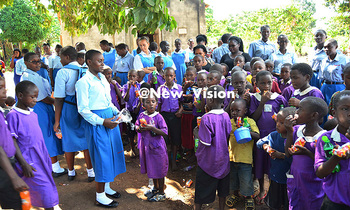 Charity is one of the key tenets of the Christian Lenten season that climaxes with the resurrection of Jesus Christ, which is being commemorated this weekend.

The students of Rubaga Girls' Secondary School (Our Lady Queen of Africa) collected several items and got on the road destined for Kamuli to a rural school of choice.

They were led by their minister for religious affairs, Angella Nabawanuka, who is in Senior Six. The items included money, scholastic, food and material items. The group concluded their Lenten project last week.

Kamuli Infant School was the students' preferred institution for their charity gesture.

It is a community nursery and primary school affiliated to Bulo Catholic Parish, in Gomba County, Mpigi district.

The Rubaga students visited the school accompanied by their headteacher, Rev Sr Claire Nakulubwa, their chaplain Fr. Moses Kiyimba and other school staff. They were received by the parish-priest of Bulo Catholic parish, Fr Francis Xavier Mayinja, who led them to the school to a warm welcome by the pupils. 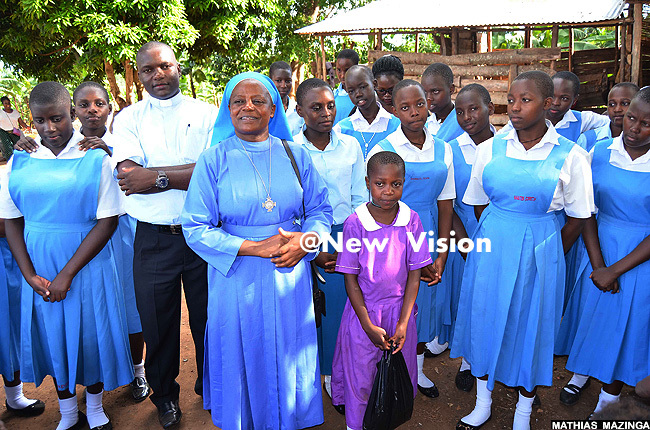 Rubaga Girls' headteacher Sr Clare Nakubulwa delivered her speech. On her right is the school's chaplain, Fr Moses Kiyimba and in purple uniform is the headgirl of Kamuli Infant School, Jemimah Namugabo

All the 141 pupils come from impoverished families, many of them orphans. The school's director Nakato Margaret Nambooze says only 20% of the pupils are able to pay up their entire tuition (sh50,000) by the end of the term.

The school, which stops at Primary Four, has five teachers.

The school has no permanent structure and pupils study from a makeshift wood and papyrus structure, which was partitioned into two classrooms. Others are taught under the tree.

When the teachers learnt about the visit, they encouraged the pupils to report wearing shoes - at least for that day. Still, only a few did.

Meanwhile, when the pupils of the remote school saw the bus carrying their visitors from Kampala, they jumped and screamed in elation.

The unprecedented joy and the pathetic situation of the pupils and their school premises caused several students to shed tears.

"I can't believe this. Why should people in Kampala spend a lot of money on booze and other luxuries on a daily basis when these children live in abject poverty and also study in such dehumanising conditions?" one sobbed.

Some students were seen carrying their less fortunate counterparts on their laps and fed them on cakes and sodas they had carried for them. "I thank you for putting your faith in action. This is the true meaning of Christian charity. These pupils felt rejected and neglected. But today, you have given them the hope and joy of Easter," said Fr. Mayinja.

He encouraged students to continue making financial sacrifices, from their pocket money, which can be pooled and sent to help needy schoolgoers.

Sr. Nakubulwa vowed to continue supporting the school, "during and out of Lent".

The head-girl of Kamuli Infant School, Jemimah Namugabo (Primary Four) thanked the visiting students for their gesture in the form of "beautiful Easter gifts".

In exchange, the pupils treated their guests to a brief musical entertainment, with the Rubaga students also singing songs of hope and encouragement to the young group.

To demonstrate their love and friendship in even a more practical manner, the visitors from Rubaga put the pupils of Kamuli on their bus and the driver then drove them around the village, before returning them to the school.

Ntagali to parents: Give your children more time