The seven suspects are believed to be part of a gang of thugs that terrorize cyclists along Iganga-Mbale highway using an AK47 rifle to hold illegal road blocks and rob people. 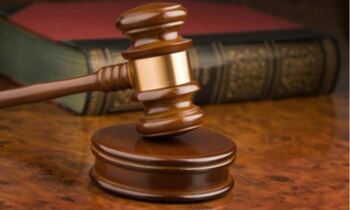 IGANGA - During the court proceeding, prosecution alleged that the seven suspects were found with stolen properties after robbing a FUSO lorry loaded with sugar and computers enroute to Mbale from Kampala at Bukonero village, 8 kilometers from Namutumba town on April 9, 2019.

The seven were picked up from Namutumba town council by the police flying squad following a tip-off from one of the locals who had earlier been approached to buy the sugar.

Prosecution further alleged that the seven, believed to be part of a
gang of thugs that have been terrorizing cyclists along the Iganga-Mbale highway always used an AK47 rifle to hold illegal road blocks and later rob people during late night hours.

The Iganga Grade one magistrate, Yusuf Ndiwalana sent the seven persons on remand at Iganga prisons till May 2, when their case will come up for mention.

Ndiwalana cautioned the suspects against any plea, saying the case is capital in nature and can only be tried by the high court.