According to the Advocates Act, the chairperson Law Council is nominated by the Attorney General in consultation with the Chief Justice 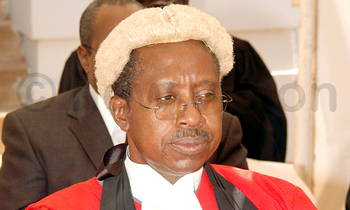 Justice Martin Stephen Egonda-Ntende is set to take over from Justice Remy Kasule as chairperson of the Law Council after being nominated by the Attorney General, William Byaruhanga.

Justice Kasule who has been the chairperson of Law Council recently clocked retirement age.

While interfacing with lawmakers on the legal and parliamentary affairs committee yesterday, justice and constitutional affairs minister, Kahinda Otafiire said: "Justice Egonda-Ntende has been nominated to take over from Justice Remy Kasule."

According to the Advocates Act, the chairperson Law Council (who has to be a judge) is nominated by the Attorney General in consultation with the Chief Justice.

The Law Council plays an integral role in the legal profession in Uganda ranging from training, accreditation and exercising disciplinary control over errant Advocates.

One of the most senior members of the bench, Egonda-Ntende is currently serving as a Justice of the Court of Appeal of Uganda, which doubles as the Constitutional Court of Uganda.

He was also involved in the setting up of an independent judiciary in East Timor, where he served as a judge of the Court of Appeal.

Egonda-Ntende lectured Law at Makerere University in Uganda and was the chairperson of the Law Reporting Committee of the Judiciary in Uganda.

He also has extensive experience in dealing with matters of drug trafficking while working as a judge in the United Nations Mission in Kosovo.