Crested Cranes coach Faridah Bulega says her side has not given up despite being eliminated in Tokyo 2020 Olympic Games women football qualifier. 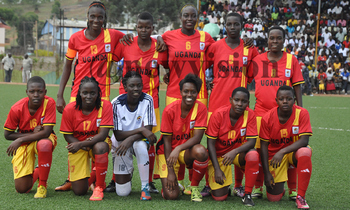 Crested Cranes coach Faridah Bulega says her side has not given up despite being eliminated in Tokyo 2020 Olympic Games women football qualifier.

"Uganda is a promising team and I believe we shall make it in the future.  This is not the end since this was like our second time meeting Ethiopia and they are more experienced than us. We shall build on that to improve our team." said Bulega.

Bulega revealed this after the Crested Cranes went down 1-0 in the return leg on Saturday at StarTimes stadium, Lugogo to be ejected 4-2 on aggregate in the first round of the qualifiers.

But the Crested Cranes will blame themselves for having wasted chances with Fazila Ikwaput and  Fausiah Najjemba all producing poor finishings, denying their team three points.

Loza Abera's only goal in the 66th minute saw Ethiopia walk out as victors in both ties having won the first leg 3-2 in Addis Ababa last Wednesday.

Ethiopia will meet Cameroon in yet another knock-out meeting to determine who makes it to the second round.