Illness costs Africa hundreds of millions every year: WHO

In a report published at the end of a three-day UN forum for universal health coverage in Africa, the WHO estimated that the 47 countries in its Africa region lost approximately 630 million healthy working hours in 2015 due to disease. 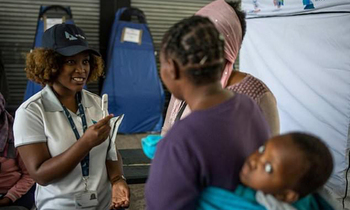 The World Health Organization has estimated that disease strips hundreds of millions of dollars from Africa's economic output, as the burden of untreated disease hugely outweighs the potential expense of healthcare.

In a report published at the end of a three-day UN forum for universal health coverage in Africa, the WHO estimated that the 47 countries in its Africa region lost approximately 630 million healthy working hours in 2015 due to disease.

"A Heavy Burden: The Productivity Cost of Illness in Africa", released Thursday, the WHO quantified that loss of productivity in economic terms.

It estimates that, if nations fail to adequately invest in healthcare and sanitation,  annual loss of gross domestic product (GDP) could equate to 2.4 trillion international dollars -- a hypothetical currency that has the same purchasing power parity as the US dollar.

"This is a huge cost to the Region and, indeed, for Africa as a whole," said WHO Regional Director for Africa Matshidiso Moeti in the report.

"Implementing the recommended essential health services to address the main causes of morbidity and premature mortality in the region would almost halve this cost."

Countries south of the Sahara account for roughly half of the five million children around the world who each year die before their fifth birthday, while 40 percent of people with the AIDS virus in Africa still do not have access to HIV drugs.

The WHO made a case for the region to "invest adequately in the development of resilient national and local health systems".

It estimated that more than a third of the total cost of illness could be saved in 2030 if nations meet their health-related development goals.

Development specialists say out-of-pocket expenditure for health is a major source of impoverishment in Africa.

Universal health coverage is poor or absent across Africa, experts say, a view supported by a lack of statistics about the issue.

In 2001, African Union countries pledged to allot at least 15 percent of their annual budget to health. The WHO said very few -- only four in 2015 -- have achieved this goal.