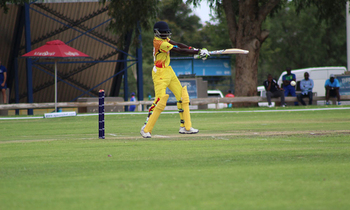 The Baby Cricket Cranes are enjoying a blaze of glory, the story goes!

With two wins in two games, they can certainly now dream of winning the ongoing ICC U19 World Cup Africa Qualifier in Namibia.

At this stage two years ago, however, it was a slightly similar story until that agonising last gasp loss to Kenya which spelt an end to Uganda's ambitions of a third World Cup appearance.

There has no doubt been some soul searching and here we are, two years later with a much improved U19 side seeking a ticket to next year's World Cup in South Africa in a winner takes it all showpiece.

In a classic show of sheer quality, Ismail Munir was ridiculously good in Uganda's 75 runs win over Sierra Leone at the Wanderers Cricket Ground.

The youngster, who interestingly only just completed his primary seven, was brutal with the bat hitting an unbeaten 73 from 120 balls.

Simon Oketcho batting at number five reached 33 off 63 balls in what turned out to be a free-scoring inning.

Cosmas Kyewuta's 33 from 40 balls lower in the batting order capped a crucial win for skipper Frank Akankwasa's side.

Akankwasa himself claimed 4 wickets as Sierra Leone were all out for 136 in reply despite George Ngegba's 34 not out off 38 balls.

Uganda who are second in the standings on 4 points, only behind Nigeria on by net run rate, are back in the fold on Wednesday against the table toppers at the Windhoek Affiies Park.