The suspects have appeared in the Grade One Magistrate's court four times only for mentioning and further remanded due to incomplete investigations. 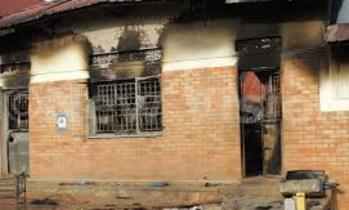 Human Rights Activists and family members of the six suspects in St. Bernard's Mannya SS fire have advised the Director of Public Prosecution to expedite investigations in the case.

They claim that delayed investigations have upset committal of the suspects to high court for trial which has affected them financially and psychologically.

Others are Michael Tayebwa, a security guard and a police officer Corp. Steven Nzeyimana.

The suspects have appeared in the Grade One Magistrate's court four times only for mentioning and further remanded due to incomplete investigations.

But some parents have always protested claiming their children were innocent and needed not to spend longer time on remand.

On Friday 15, 2019, the presiding Magistrate adjourned the case until March 22, 2019 which provoked anger among the agitated family members.

She explained that they handle every process carefully to avoid making blunders which may affect justice.

But Niyo's sister -Josephine Ingabire said she spends about Ugx60,000 on transportation to and fro in order to attend a court session in Masaka.

However to her disappointment the suspects are consistently remanded without committal.

Kisuule's father Moses Mujumba  said that justice is always denied when investigations delay especially for innocent youths like his son.

He added that Kisuule was already in custody at Mannya Police Station two days before the dormitory was burnt. He had refused to go back home when the school expelled him for alleged misconduct.

Further still, Tayebwa and Nzeyimana only have one count of duty negligence. However, their relatives said that they want to stand surety for them but have not had an opportunity due to delayed committal by the DPP.

She explained that timely prosecution of the suspects saves time and helps to clear doubt in the judicial system.

Speaking to the New Vision in his chambers, the Magistrate (Adyeri) said the case is capital in nature and cannot do much about it other than mentioning and remanding the suspects.

He explained that it is upon the (DPP) to determine the case for committal after investigations.

Adyeri further added that if the suspects spend six months on remand without the prosecution (DPP) concluding investigations, then the suspects have a right to be released by law.