Recently the Speaker of Parliament, Rebeca Kadaga said the plus size women should also be given a platform rather than being discriminated against. 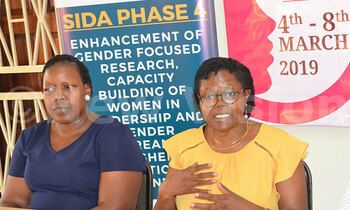 KAMPALA- Scholars at Makerere University School of Women and Gender Studies are set to debate the controversial Miss Curvy beauty pageant ahead of International Women's Day celebrations on 8th March.

Dr Consolata Kabonesa, Associate professor at Makerere University said the discussion on curvy women will be part of activities of the Gender Identity week starting  Monday.

She said the dialogue will attract staff, students and development partners among others and will include discussions on topical issues related to gender and sexuality.

She said the discussion will help people to know the benefits of Miss Curvy and those against will also know why they should not participate.

"Women need to know why they should participate in Miss Curvy Pageant or not. Miss Curvy is a topical issue, we need to give women an academic face about this.'' Kabonesa revealed this during a press conference at Makerere University.

The participants will also get to know whether Miss Curvy beauty pageant contributes to sustainable development for the country.

Recently the Speaker of Parliament Rebeca Kadaga said the plus size women should also be given a platform rather than being discriminated against.

She noted that winners of the Miss Curvy Pageant can always partner with people like Miss Uganda, Quiin Abenakyo and promote the country using their beauty and talents.

The chief organiser of the inaugural edition of the pageant, Anne Mungoma recently defended the pageant saying it was misconceived by Ugandans as one that is aimed at promoting sex tourism.

According to Mungoma, curvy women have over the years been side-lined as not alternative and competent enough to take part in beauty pageants such as Miss Uganda with only slim women being considered.

This year's International Women's Day celebrations will be held at Rwiimi Primary School play ground in Bunyangabu district, with President Yoweri Museveni as the Chief Guest.

The global theme for this year; "Think Equal, Build Smart and Innovate for Change" is a call to all stakeholders to create a paradigm shift for transforming mind-sets to the goal of gender equality as well as identifying new ways of advancing the women's agenda at all levels.

At country level, the theme chosen for this year's commemoration is "Empowering Women through Innovative Approaches to Social Protection: A Pre-requisite for Inclusive and Sustainable Development".

Dr Ruth Nsibirano, senior lecturer  said  there is still a lot to do especially  in terms of access to education, resources of production and achieving health outputs.