"The partnership will strengthen cooperation on security and prosperity, and support a joined up approach to tackle climate change," UK officials added. 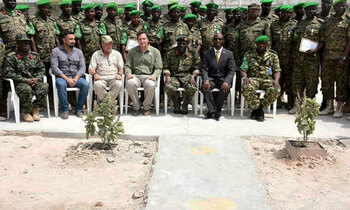 The UK Government has injected 30m pounds (about sh143b) into security across Africa.

According to UK's state minister for Africa, Harriett Baldwin, the money is part of a long term investment on the continent and a new strategic partnership with the African Union.

"The funding boost comes as Britain signs a new strategic partnership with the African Union, strengthening the engagement between the continent and the UK Government," a statement from UK's Foreign and  Commonwealth Office, noted.

"The partnership will strengthen cooperation on security and prosperity, and support a joined up approach to tackle climate change," UK officials added.

Divided among the 54 countries, each state will get sh2.6b out of the sh143b UK pie to the continent.

Part of the money, UK officials said, will also cater for the continent's prosperity.

"Our new partnership will also cement our relationship with the African Union, building on growing economic ties to forge new opportunities for young people and reinforce our close bonds," Baldwin said.

"From our support to observers, ensuring free and fair elections in Nigeria and Senegal this weekend, to the crucial training our Armed Forces provides to security forces in Kenya, the UK's partnership with African countries continues to help empower and upskill people across the continent, and this funding will allow us boost these efforts," she added.

Baldwin made the pronouncement during her visit to Ethiopia on February 21.

UK's Foreign and Commonwealth Office officials said the target of UK is to be the largest investor in Africa by 2022.

"The funding, which forms part of the partnership agreement, and will be spread over three years, will be used to train peacekeepers in Kenya, assist free and fair elections, and support the next phase of negotiations for the African Continental Free Trade Area," the statement noted, emphasising that under the new partnership UK will also support Africa-led ambitions, offer expertise and create job opportunities.