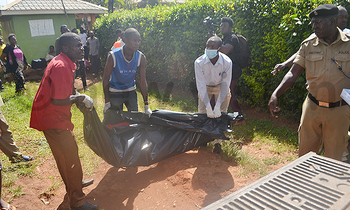 A yet to be identified woman with dreadlocks was found dead and body dumped in a compound of Rose Namutebi, at Katabi, Busambaga cell in Entebbe Municipality.

According to Fred Mugerwa who is in charge of security at the local council, the body was discovered by a girl who was sweeping the compound on Monday morning.

"The face had bruises and she seemed to have been strangled. She was only left with a top while the rest of the body was exposed, showing several scratches," intimated Mugerwa.

Area residents who preferred anonymity, noted that the deceased was spotted at a nearby bar, Captain's Bar, on Sunday evening. When a Police sniffer dog was brought to the scene, it traced her origins to the bar.

Captain's Bar where the victim was last seen. Photo by Julius Luwemba

No arrests have however been made by press time.

A source at Entebbe Police Station said that the deceased, could have been strangled from somewhere else before the body was dumped.

Some residents however were unhappy that they were not allowed to view the body to ascertain the woman's identity.

The body was taken to Mulago Hospital for a post-mortem as investigations continue.