The 17-time Grand Slam champion missed most of the next three months and cut short his season to have surgery on a troublesome foot injury. 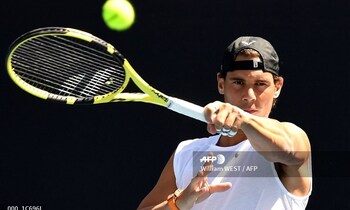 AUSTRALIA - Rafael Nadal revealed Saturday he was back to full fitness and has a brand new serve to unleash at the Australian Open.

The world number two limped away from Melbourne Park a year ago, forced to retire in pain from his quarter-final with Marin Cilic.

The 17-time Grand Slam champion missed most of the next three months and cut short his season to have surgery on a troublesome foot injury.

He pulled out of a Brisbane warm-up event with a slight thigh strain but declared Saturday his troubles were behind him.

"I feel good. If I am not feeling good, I will not be here," Nadal told reporters two days before the start of the first Grand Slam of the year.

"I have good feelings in terms of the surgery. After surgery, after months without competing, having trouble practising, of course there are always issues when you come back.

"But it's nothing new for me," added Nadal who admits he has to manage the workload on his creaking 32-year-old body, battered by years of his all-action style.

To better cope, he has remodelled his serve to help extend his career.

"There are always things to improve," said the Spaniard, who faces Australian wildcard James Duckworth in the first round.

"The serve was always a thing that I tried to improve, and I think I did.

"I am happy with the motivation to do something new. If I am able to make that happen in a good way, that hopefully it will give me the chance to help me on my game longer term.

"I didn't compete with this new serve, so let's see how it works. I am confident it's going to work well."

His 2018 season ended with another injury retirement in the US Open semi-final but Nadal still managed to win five tournaments in a truncated season, including a record-extending 11th French Open to leave him just three Grand Slams behind Roger Federer's all-time record of 20 majors.

Nadal said he was sad to hear another member of tennis fabled 'big four', Andy Murray, was to quit tennis this year, possibly as early as next week, with chronic hip pain.

Nadal said he could relate to it having had his own succession of injury issues over the years, but he had always been focused on getting back on court if at all possible.

"My only goal is always to have been to keep going," he said. "That's the only way that you can keep having confidence and hope for a good comeback in terms of health.

"But I know that tennis is not forever. I want to do it as long as I can and give myself the best possibilities to fight for the things really I am passionate about, and to keep doing the things that I really enjoy doing.

"When the day arrives I cannot do it will be the day to go and do another thing."