Enanga, to be deputised by Polly Namaye, has previously occupied the position of Police spokesperson. 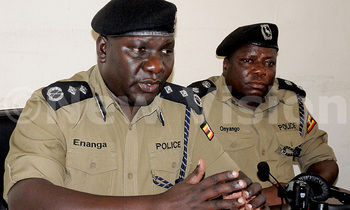 He replaces Emilian Kayima, who, according to reports making rounds, has been transfered to the office of Political Commissar.

Enanga will be deputised by Polly Namaye. He was first appointed as Police spokesperson in 2014.

In the changes, Luke Oweyesigire, who has been the Kampala Metropolitan Police spokesperson, has been dropped to deputise Onyango.

Kayima leaves the office after a little over one year in charge, having been appointed to replace Asan Kasingye in November 2017. Kasingye had himself replaced slain Assistant Inspector General of Police Andrew Felix Kaweesi.

Kayima's successor Enanga had been dropped by former Police chief Gen. Kale Kayihura and his return marks a second stint as Police spokesperson.

Namanya had also previously served as deputy Police spokesperson, before she was replaced.