Survivor to bury her family killed in Kyazanga accident

The family had feared that breaking the sad news to her earlier would affect her recovery process. 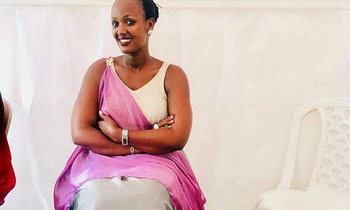 PIC: Dorcus Mugakatare lost her husband and children in an accident she survived. (Courtesy photo)

After nearly two weeks of waiting, relatives and friends have finally agreed to bury five members of the same family who were killed in a accident along the Masaka-Mbarara highway.

This was after one of the survivors only learnt of the fate of her family 10 days after the accident.

Dr. Livingstone Kimbugwe Byamungu and his four children, including twins, died on spot in the crash involving three vehicles near Kyazanga town in Lwengo district. This was on December 30.

His car, a Rwandan-registered land cruiser (RAD009L), which was carrying seven people, was moving from Rwanda when it collided with a trailer.

Local police said a Swift Safaris bus (UAU 398M), which was headed for Kampala from Mbarara, was also involved. Lamech Kigozi, the Police spokesman for Greater Masaka, said the accident occurred at about 9:30pm Ugandan time.

Byamungu's nephew Mike Kakande said that their mother Dorcus Mugakatare and her brother Richard Ndahiro (who was driving) survived the crash and were transferred to International Hospital of Kampala (IHK).

Meanwhile, the bodies of the victims were transferred to the Rwandan capital Kigali but kept in a mortuary, awaiting the recovery of the mother so she would attend the burial.

Kakande said that Mugakatare has since been hospitalized and on Wednesday, they disclosed to her that she and her brother were the only survivors of the accident.

"We wanted the wife to attend the burial. She had been in serious pain and was only able to speak on Wednesday. Only then did we tell her what had happened after she inquired about the fate of the others," he said.

The family had feared that breaking the sad news to her earlier would affect her recovery process.

"She then asked whether we had buried the dead. 'No' was our response. We told her we had waited for her to come to, a decision she appreciated. So she accepted to leave the hospital to attend the burial of her loved ones," said Kakande.

They planned to leave for Rwanda today (Thursday) or Friday. According to a tentative programme for the funeral, there will be prayers at St. Peters Remera and burial will be on Saturday in Rusororo, Kigali.

George William Kobu, an employee of Radio Buddu, said his brother Byamungu was traveling with his children to Karumaga in Lwabenge, Kalungu East to usher in the New Year with his mother.

The twins were studying at St. Mary's SS Kitende and were going to visit their grandmother Sarah Kitegyeki. Other sources indicated that one of the twins had transferred from St. Mary's Kitende to Rivera SS in Kigali.

Eye witnesses said the driver of the trailer lost control, leading the vehicle to overturn and ram into the land cruiser and bus.

Funeral vehicles from Kampala were hired to take the bodies back to Rwanda.