Liverpool knocked out of FA Cup by Wolves

Goals from Raul Jimenez and Ruben Neves either side of half-time sent the hosts into round four. 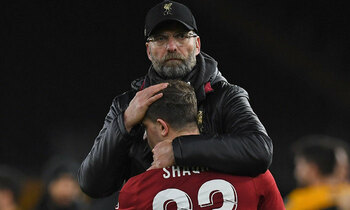 PIC: Liverpool manager Jurgen Klopp consoled Xherdan Shaqiri after they were dumped out of the FA Cup. (AFP)


Liverpool crashed out of the FA Cup with a 2-1 defeat to Wolves on Monday as Jurgen Klopp paid for naming a second-string side that included three teenagers at Molineux.

Goals from Raul Jimenez and Ruben Neves either side of half-time sent the hosts into round four despite Divock Origi's fine strike briefly bringing Liverpool level after the break.

Fresh from a first Premier League defeat of the season to Manchester City in a thrilling top-of the-table Premier League clash on Thursday, Klopp made nine changes to his starting line-up.

Only James Milner and Dejan Lovren retained their places, but Lovren limped off after just six minutes and was replaced by 16-year-old Ki-Jana Hoever.

Rafael Camacho and Curtis Jones were also handed debuts, however it was Liverpool's most experienced player, Milner, who was at fault for the opening goal.

Diogo Jota caught the former England international in possession in midfield and put Jimenez clean through before Fabinho could intercept.

The Mexican steadied himself before firing low past Simon Mignolet for his seventh goal of the season with the only notable chance of the first-half. 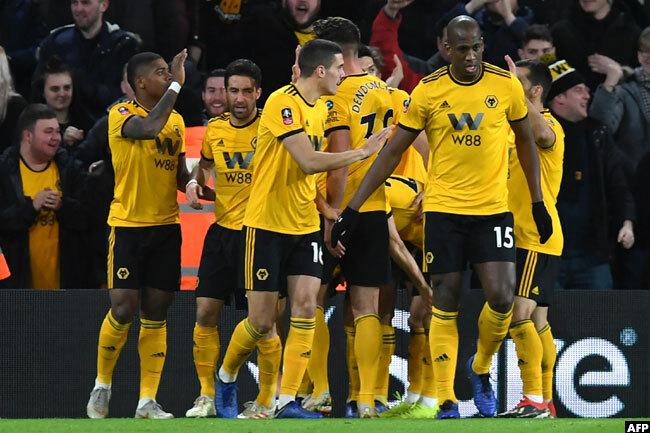 Without Mohamed Salah, Roberto Firmino and Sadio Mane, Liverpool were struggling to get any momentum going forward.

But the visitors were level out of nothing when Origi collected a loose ball on the edge of the area six minutes into the second period and smashed the ball high past John Ruddy.

Wolves, though, have made a habit of upsetting the Premier League's established top six in their first season back in the top flight.

After beating Chelsea and Tottenham and holding City, Manchester United and Arsenal in the Premier League, Liverpool can now be added to the list of scalps for Nuno Espirito Santo's side thanks to a wonder strike from Neves.

The Portuguese international took aim from 30 yards out but had too much power and accuracy for Mignolet to find the bottom corner.

Only a wonder save from Ruddy denied Xherdan Shaqiri a stunning equaliser and Liverpool a replay as the Swiss's free-kick was touched onto the inside of the post by the Wolves goalkeeper.

Klopp had a final roll of the dice by throwing on Salah and Firmino for the final 20 minutes.

But even their firepower failed to spark a fightback and Klopp's team selection will now be seriously questioned.

With Liverpool already out of the League Cup, the German coach will need to deliver a first top-flight title in 29 years or the Champions League to avoid ending a fourth season in charge without winning a trophy.