Key things to know about Gabon

Gabon has enjoyed relative political stability since its independence in 1960 and has had just three presidents over half a century. 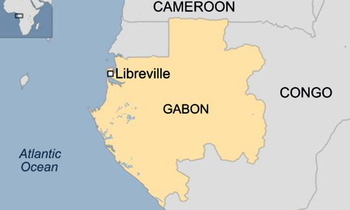 Gabon, where the army Monday called for an uprising, is one of Africa's top oil producers and has been ruled for more than 50 years by the Bongo family.

The current president Ali Bongo, who took over from his father in 2009, has been absent since October when he suffered a stroke in Saudi Arabia.

Here is an overview of the lush African nation.

A former French colony, it spans some 268,000 square kilometres (103,000 square miles) with a population estimated at just over two million, according to the World Bank in 2017. One in two Gabonese is aged under 20.

Roughly 80 percent of its people are Christian while Muslims and animists account for the other 20 percent.

Gabon has enjoyed relative political stability since its independence in 1960 and has had just three presidents over half a century, two of them from one family.

After nationalist president Leon M'Ba, Omar Bongo took power in 1967 and ruled for 41 years, making his the third longest reign in modern Africa.

France's closest ally in Africa, Bongo was a key figure in a murky network of trade and political ties between France and its former African colonies known as "FrancAfrique".

When he died in 2009, his son Ali was elected, winning a second term in 2016 although the results were contested, plunging the country into a wave of post-vote violence.

Ali Bongo, 59, suffered a stroke on October 24 while in Saudi Arabia and has not been in Gabon since then, recovering in Morocco.

Gabon has been an oil producer since the 1960s, earning it the title of "central Africa's little emirate".

Before the global slump in oil prices in 2015, black gold represented 45 percent of Gabon's GDP, but this shot down to 27 percent in 2017.

An economic crisis since 2015 has led to a rise in unemployment, repeated strike action, companies operating on slowdown, and austerity measures being slapped on workers.

In a bid to reduce its dependence on oil, Gabon has looked to diversify its economy.

After taking power, Ali Bongo launched a string of construction projects, such as hospitals and roads, but several were halted due to lack of funds.

Despite its rich natural resources, about one-third of Gabon's population still live below the poverty line.

Gabon's forests cover about 80 percent of its territory, hosting exceptional wildlife and biodiversity which the country has sought to exploit through eco-tourism, showing off its wild gorillas, chimpanzees, panthers, elephants and hippos.

In 2002, Omar Bongo created 13 new national parks that cover around 11 percent of Gabon to protect its wildlife and forests from excessive logging.

It is also the world's second largest producer of manganese, and the forests provide 12 percent of global timber exports, including coveted tropical hardwoods.

Gabon: half a century ruled by Bongo family